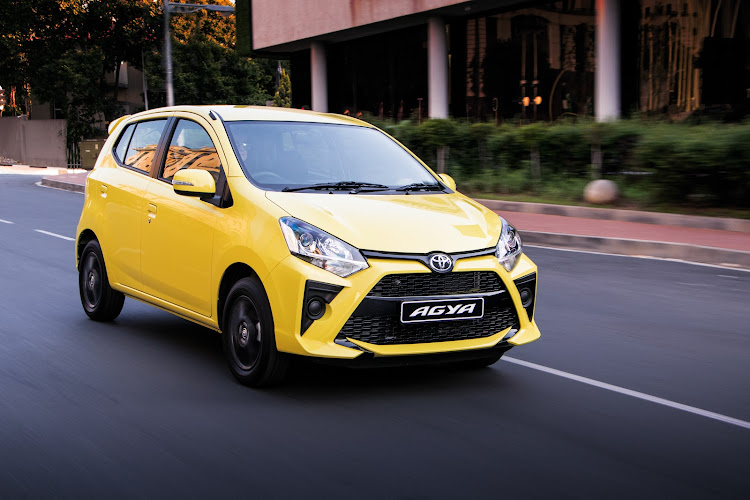 I had been experimenting with my homemade pasta sauce in the week this bright yellow 2021 Toyota Agya rolled into my driveway.

Inspired by something I’d seen on YouTube, I had decided my rustic Neapolitan was perhaps in need of some more bite. Consequently I made a quick pass by the local deli where I swiped my card for cayenne pepper, dried chilli seeds and a small bottle of chilli-infused olive oil.

“Be careful,” warned the cashier as I punched in my pin, “that stuff is deceptively potent.”

Turns out she wasn’t joking. After being stirred in with all my other piquant ingredients, this angry amber-gold liquid had reduced my signature dish into something that could have passed for Salsa Roja. Lord knows it was as vicious: a tomato-based lava that broiled down my throat leaving a trail of brow sweat, hiccups and heavy breathing.

There was, however, a whole lot worse to come.

You see earlier in the day I had agreed to take a post-dinner drive to visit my friend on the other side of town. Said friend was having some issues with his Wi-fi router, and being about as tech-savvy as an octogenarian he wanted me to have a gander at it. So after the dishes were done I texted to tell him I was on my way.

The sun had long sunk below the horizon but the cheerful yellow Agya glowed through the tungsten-lit streets like a glob of 1980s neon. Gawky from some angles, comically aggressive from others, this Daihatsu-based Aygo replacement stands out in its segment for better or for worse: an automotive Pokémon looking to poach sales from the more conservative likes of the Renault Kwid and Hyundai Atoz. 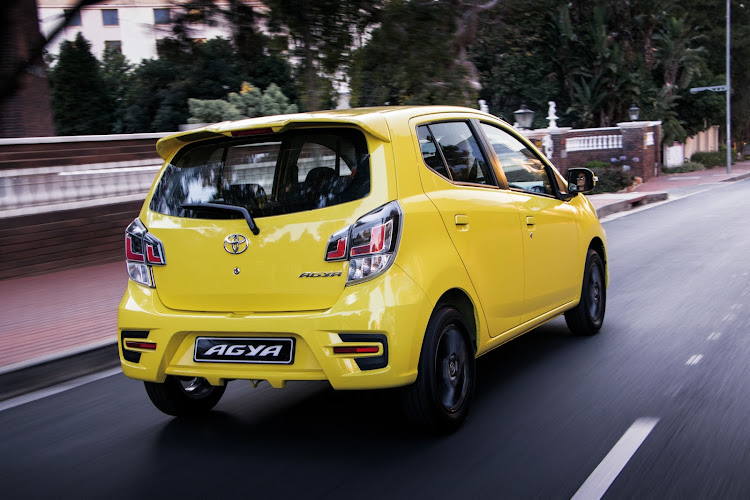 Ambling through the quiet suburbs en route to Randburg, I get a chance to familiarise myself with the Agya’s interior amenities. And things aren’t all that bad if I’m honest. For the money you get an AC with digital controls, electric windows, power side mirrors and an onboard computer.

There’s also an audio head unit that, despite screaming “mid-2000s Hi-Fi Corporation”, offers a plethora of inputs including USB and Bluetooth. Music is piped through two door-mounted speakers and the sound is adequate. What aren’t adequate are the seats.

Oh, they’re comfortable enough but they come upholstered in some of the thinnest, chintziest fabric I’ve seen in ages. Expect them to age terribly. Other disappointments manifest in a non-adjustable steering wheel, acres of hard scratchy plastics and a rear view mirror that distorts as badly as the one in your five-year-old daughter’s “My First Dressing Table” play set. Not what I’d expect from a Toyota.

Despite these issues the cabin does seem fairly well pieced together: the scabbed-up asphalt encountered en route to said IT crisis reveals no undue rattles or vibrations.

Upon arrival I was met by incoherence and uncertainty. Next to an old CRT television set from the early 1990s sat the router and Wi-fi box. I fiddled with cables, studied blinking LED lights and explored IP settings. After the third system reset it was clear the fault was on the other side of the line. 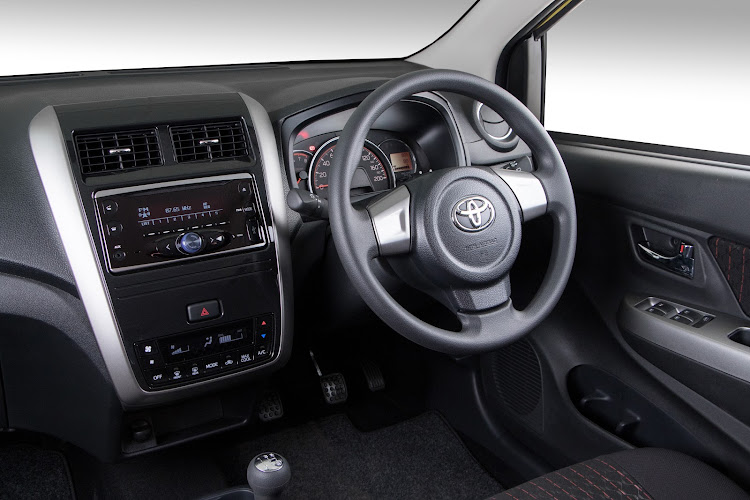 The power steering system has a pleasing weight to it. Lack of reach adjustment is annoying.
Image: Supplied

It was also clear that inside my body a storm was busy brewing: some terrible squall obviously fuelled by excess oil and capsicum. Disaster was imminent and I needed to get to a safe haven before it was too late. So I came up with a plausible excuse to get out of coffee and bolted for the Agya.

Less than an hour ago I had been focusing on fuel efficiency. Now, treating red robots as yield signs, I found myself pushing the little 1.0-litre three-cylinder engine for all it was worth.

I’ve always been a fan of three-pot motors and this one is as good as any with a comically rambunctious soundtrack that for some reason conjures up memories of an old Porsche 912 I once drove around Midvaal Raceway. It’s eager to rev and matched to a short-ratio five-speed manual transmission, reassuringly brisk through the first three gears.

Mind the clutch though – it is endowed with one of the snappiest, most aggressive actions I’ve sampled inside a modern automobile.

During this angst-ridden race against the clock a few more things stand out, such as the power steering system that swaps the trend of over-assistance for a pleasing amount of weight. Then there’s the handling. While no GR Yaris, I will concede the Agya goes around corners better than any of its competitors.

Flat-out through the infamous Rustenburg Road kink near Victory Park shopping centre? No problem – especially not with Hurricane Dora about to hit. 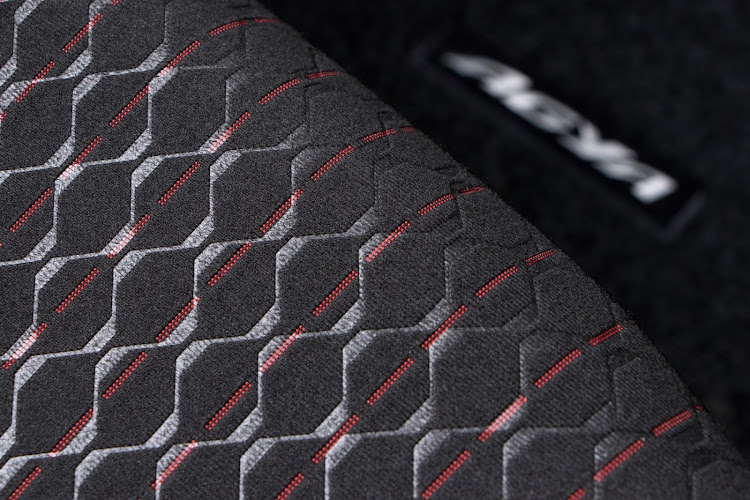 A few minutes later I screeched into my car port and relief washed over me in an awesome wave. While I’d managed to make it home without having to visit the facilities at a sketchy back street service station, the Agya proved it can shrug off the kind of abuse that accompanies the acrid aroma of hot tyres and burning brakes.

For the target market to which it’s aimed – first-time buyers and those with zero mechanical sympathy – this is a jolly good sign. Especially when you consider this little Toyota will spend most of its time negotiating the gruelling rigours of the stop-start urban environment.

This is not to say that it can’t highway – it certainly can – although it does get tiresome rather quickly thanks to poor sound deadening, a short final drive (you’re barely cracking the legal limit at 4,000rpm) and an odd wheel shimmy that wriggled through the steering column from around 140km/h onwards. Let’s just say that it’s not going to be all that much fun on a long straight trek down to Cape Town, no sir.

Be this as it may, I still like the Agya. For although it’s built to a budget – exposed metal in the boot plus an absence of wheel arch liners bear witness to this fact – it performs well for what it is. It’s spacious too: even with the driver’s seat set to my height rear legroom is plentiful.

Best of all and unlike ****box rivals such as the Datsun Go, Renault Kwid and Suzuki S-Presso, the Agya won’t disintegrate if a soda can rolls into you as it scored four stars in ASEAN NCAP crash testing.

So, yeah, if you’re in the market for a cheap, relatively cheerful hatchback to see to basic transportation needs then I would say going to look at one is a good idea – an infinitely better one than yours truly getting creative in the kitchen.