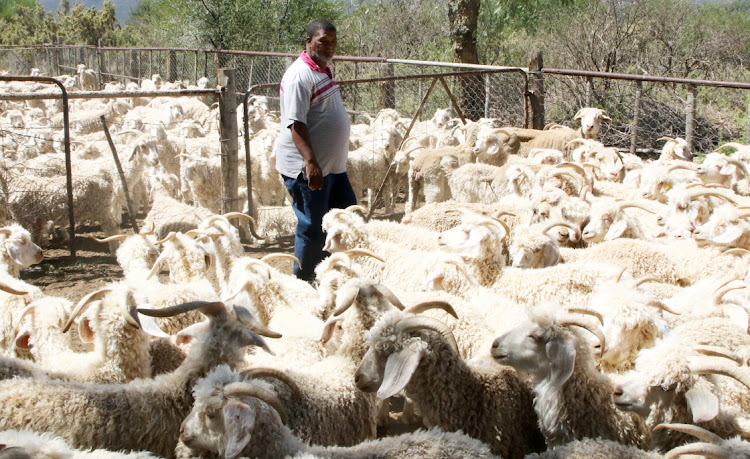 The ongoing drought in the Karoo is hitting farmers hard  where it hurts most — their pockets.

Apart from the lack of water, the cost of feed has increased and it has become particularly expensive to transport to farms.

The absence of rain has seen dams and rivers dry up, grass die and the soil become sandy.

Angora goat farmer Leon Barends said because of the drought, the quality of hair produced by his goats had deteriorated and resulted in a far lower weight of hair.

Barends, who runs Irene Farm with his brother, is in partnership with the Mohair Empowerment Trust.

“The hair produced by my goats has no weight on it because there is no feed, meaning I get far less money after weighing the hair,” Barends said.

Aberdeen farmer Marlon de Jager said his account for feed in October was R60,000 and it was expected to increase in November.

Mohair SA spokesperson Riaan Marais said the drought was having a major effect on the mohair industry.

Because there was little to no natural feed growing in the region, this had affected the type of hair angora goats produced.

“There has been a major impact on the industry in the sense of feed available and [the] financial impact that [farmers] can’t rely on natural feed, resulting in them having to buy feed and  pay transport to get the feed to them because of their location,” Marais said.

“We’re definitely getting less in kilos. When animals get different kinds of feed it affects the quality of hair.

“The finer quality of hair is worth more, while stronger, thicker hair is a little cheaper.

“With the special feed that the animals have been getting, they’ve been producing finer hair.

“The impact is that the fleece from the animals physically weighs less kilos but the product is worth more, so it’s a bit of a trade-off,” he said.

Barends confirmed his goats produced finer hair but added this did not make a different to his bottom line because of the number of goats that go to the shearing season.

Marais said the financial impact was “not terrible” for Mohair SA because they were selling hair at a higher price, but they were producing less in terms of kilos per animal.

“Drought has improved the quality of hair but it’s not ideal because you do need the various types as well.

“Finer hair is exported to Italy, stronger hair, lower quality, usually goes to Asia [China]. There’s a market for both of them so you need to be able to supply both markets,” he said.

“Overall the industry is improving, finer hair is doing very well, while stronger quality is improving after the dip.”