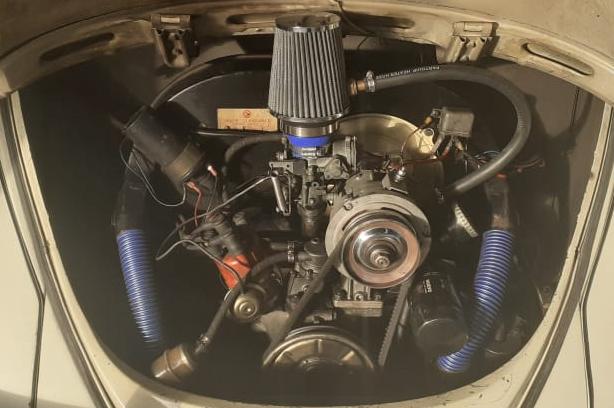 Dolly, my 1962 VW Beetle — who we joke has a bedroom, not an actual garage — is again the subject of this weeks’ column. This time we look at the issue of performance.

Many people are in a permanent state of haste these days, and having to cool their heels while the vintage car in front of them sedately accelerates to 60km/h appears to be too much for them.

They come roaring past me, either staring resolutely ahead or actually tooting their horns because I’m in their way. One actually flashed me the finger recently.

Of course, Dolly is not a sports car, or a hot hatch or a pocket-rocket by any means. Most days I’m just grateful she’s still running, hasn’t given me any serious trouble and still carries me where I need to go.

That said, while she may not have a comparable turn of speed, she does have a loud, noticeable hooter — of the electric air-horn variety that loudly blasts “aah-ooooh-gah” — and embarrasses my better half no end.

I’ve thought of ways to unobtrusively increase performance slightly, and my mind dwelt on superchargers and turbos. But those things don’t come cheap and usually involve pulleys and belts and all sorts of paraphernalia that clutter up the engine bay and overcomplicate things. I wanted something cheap and simple, and just carried on driving Dolly “as is”. After all, I did not want to make any permanent changes that would detract from her original charm.

Then, a few months back while I was scrolling through “Wish”, I spotted a device for sale that claimed to reduce fuel consumption while offering a modest increase in engine performance and speed. My interest was piqued, and I pondered the matter for a while. Would it work or would it be just another case of false advertising? I decided there was only one way to find out.

Finally, I ordered one. After a few months’ wait — thanks to Covid — it arrived last Friday, and that evening I was already taking measurements and trying to work out how to install it on Dolly.

By midday on Saturday I’d already visited three local car and bike accessory shops and bought an air filter, a high-heat silicone hose or two and some clamps, and set about creating a doodah around the item I had received in the mail.

The resulting doodah is a sort of inertia-powered impeller that acts like a supercharger. Fitted to Dolly’s antique 1200cc flat four air-cooled motor, it certainly looks impressive. I figured that if the thing didn’t work as advertised, at worst I’d replaced the old leaky, dirty oil-bath air filter and its grubby breather hose with a better free-flow system that looked neat and sweet. That said, I certainly wasn’t prepared for what followed.

There is a modest increase in performance, yes — just enough to make me worry about having to upgrade Dolly’s soggy old brakes! But while I wouldn’t actually do any stoplight racing in Dolly, the increase in low-end power is enough to tempt me to do so.

Having all that extra “vrrrroom” under my foot in this car is a new one on me. I haven’t floored her accelerator on the highway yet — remember this old bug has retreads on, and no seatbelts, but as yet I don’t know if the top speed has been affected or not. But it probably has not by much.

Speed isn’t everything, as you start to figure out once you’re past your twenties. Now, getting to the speed limit in blisteringly quick time ... well, that’s something different I can only imagine how this thing would improve the performance on a 1600 twinport bug with a free-flow exhaust, or a Citigolf. Yikes!

This device has also smoothed out the power-band somewhat. Gone is the jerkiness in low first gear speeds and, as I notice the envious looks on the faces of passing drivers, I wonder where the hell that lovely low growl in the exhaust note came from? Under acceleration her standard peashooter exhaust sounds just like a 4-into-1 now!

I always drove Dolly with a smile on my face — how could I not, after all? Beetles have always been my dream car, but lately that smile’s broadened into a Cheshire Cat grin!