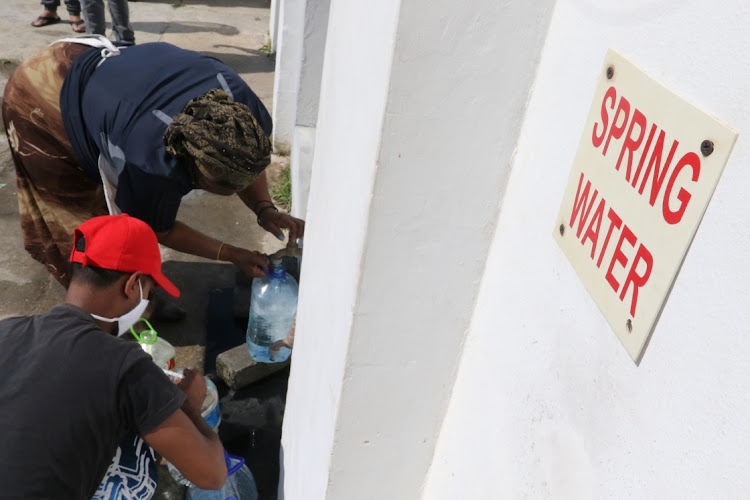 As most parts of Nelson Mandela Bay’s taps ran dry on Friday, queues snaked around a Malabar home where the owner was providing a little relief to parched residents from a natural spring on his premises.

Ebrahim Soomar said the water came from the earth and was therefore not his, hence he has opted to share the scarce resource.

“Water is life, without water we cannot survive and that is why I open my home and my heart because this spring is God’s gift to the people, through me. It is not mine and I have to give and share with my community,” he said.

Over the past weekend and for some days during the week, the northern areas have experienced water outages.

On Friday the municipality said residents could expect continued intermittent water supply throughout the day as the Emerald Hill reservoir ran dry.

Soomar said he wanted to quell any concern that he was selling the water to the community and said he could not sell a blessing.

“I do not want to profit from this. I do it because I can. I have to help, otherwise I do not know what the residents would do.”

Soomar has been helping the community with water for more than four years and said his ultimate dream was to put up tanks to catch more water and store it to provide for communities on an even larger scale.

Weekend Post visited the Malabar home and some of the residents in the queue described him as a lifesaver.

John Kerspay, from a nearby street in Malabar, said: “This is the second day without water now and we have frequent water cuts, but it has never been this bad before and the worst part is that we do not even get a warning, or the notice comes after the fact.”

Concerning Soomar, he said: “I once asked uncle how I can repay him and said he wants no payment and that he would get his reward from God.

“That is the kind of man he is, and may God bless him for being a blessing to the community.”

Ravisie Adams also lives nearby and said she was grateful to Soomar because she had no transport to get to the water tanks and would not have been able to carry the containers.

“We appreciate him and his efforts. There’s so much going with water and electricity outages, but to know at least that you will have some water to cook and drink and bath with, it is a relief,” Adams said.

Residents from Rowallan Park, Kabega Park and other surrounding areas also queued for water at a tanker deployed near the Linton Grange SPAR.

Ward 9 councillor Heinrich Muller said he had been at the tanker point since the previous night and that  people had been queuing from as early as 6am on Friday morning.

Herbert Hurd Primary School principal Glen Harris said they had to send pupils home because they were unable to operate as normal without water in light of Covid-19 protocols.

Addressing the media on Friday, infrastructure and engineering head Mongameli Bobani urged residents to use the remaining water sparingly and pray for rainfall as water consumption remained higher than the supply.

“As the city we can tell you that we are on Day Zero because we are using more water than we actually have in our dams. Now our consumption of water is 290-million litres per day, while we are supposed to use 268-million litres a day or less,” Bobani said.

He said the current total dam levels were at 18.8%.

As part of the long-term solutions,  Bobani said: “We have a number of projects now under way to mitigate our water supply and this includes the Coegakop water treatment works.”

He said water supply would be restored to residents affected by water outages in the northern areas and western suburbs on Friday evening.

Say what? Social media users in a frenzy

Nelson Mandela Bay residents were spitting mad on Friday when large parts of the metro were left without water and municipal officials asked for water to be used sparingly.

Many found it ironic that they were being asked to save water when not even a drop was coming out of their taps.

Here is what they had to say on social media:

Kerry Oberholzer: In the middle of a global virus that is killing people daily and we need to regularly wash, how do we with no water? Bet we will still be charged for water and electricity AVAILABILITY even though it’s not available when we need it.

Shereen Mohammed: Maybe this is the new way of saving water by cutting off the supply and blaming it on a burst pipe? There seems to be a pipe bursting every week these days.

Laure Le Roux: How do we use water sparingly when we don’t have?

Masixole Qwazi: What about the leak [on the corner of] Saba and Xegwana [streets]. Almost three years running, no-one seems to care about it. I took pictures and reported many times.

Juandre Pikkie Swart: Guys complaining. This is how it’s going to be soon on a daily basis when the dams are empty.

Nishil Vaghmaria: Use what water sparingly?