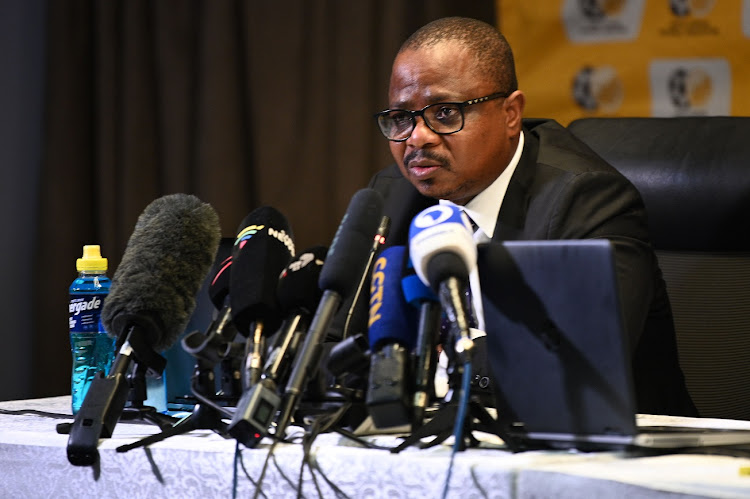 The SA Football Association (Safa) has said that a Ghanaian FA (GFA) statement seemingly containing many factual inaccuracies regarding Safa's appeal to Fifa over Sunday's disputed 1-0 World Cup qualifying win by the Black Stars against Bafana Bafana is “unfortunate and distasteful”.

The GFA levelled some strange accusations against Safa, including that SA football's ruling body had complained over a “nine-hour trip” from Accra to Cape Coast for the Group G match, the result of which saw the Black Stars progress to the next round of qualifying.

The GFA's said it was “shocking, irresponsible, and outright disrespect” that Safa had “spread falsehoods to the media”.

Bafana coach Hugo Broos, in Safa's press conference on Wednesday to clarify their reasons for asking Fifa to investigate “match manipulation” based on the controversial officiating of Senegalese referee Maguette N'Diaye, had complained of a three-hour trip to Cape Coast. The coach had said the situation was made worse by a further two hours of Covid-19 testing on arrival in Accra, but conceded that was an immigration ruling in Ghana.

Safa CEO Tebogo Motlanthe said the association does not want to get entangled in a war of words with its Ghanaian counterpart.

“The Safa position has never been nine hours. The coach said it was three hours, plus two hours which we can't blame Ghana for — it is their immigration rules,” Motlanthe said.

“But we are also saying let's let the Fifa process take place, and we will respect the decision.

“We find the GFA's statement unfortunate and distasteful because it is full of inaccuracies. We did not submit any complaint to the Ghana FA about our treatment in Ghana.”

The Ghanaian FA's statement, published on their official website, accused Safa of lying on several counts regarding Bafana's trip to Cape Coast.

“First and foremost, before the game itself, lies about the distance between Accra and Cape Coast were released to the extent that it was alleged that the SA team took nine hours to make the journey from Accra to Cape Coast after they arrived in Ghana,” the GFA said.

“Then again, the official handle also tweeted during the match that the SA team was being intimidated, molested, and robbed in Cape Coast.”

The GFA continued: “The truth is that the distance from Accra to Cape Coast is only 127km ... The total driving time is just over two hours and not seven or nine hours ... Thus, Safa started creating a foundation for a mountain of lies even before the game day itself.

“ ... Even though we believe that it is within Safa’s right to call for investigation, if they feel that certain factors contributed to their loss, we wish to state that the way and manner lies and allegations have been thrown into the public space has been very irresponsible leading to injury and violence.

“These allegations from Safa are nothing but a planned scheme and a calculated attempt to shift focus from the defeat, divert attention from their failure to qualify for the play-offs and unjustly dent the hard-earned victory of the Black Stars.

“Is it not sad that even innocent ball boys (ball retrievers) were not spared in the allegations?

“ ... The Black Stars is a globally accepted brand that would not indulge in any act to bring the game into disrepute. Ghana has been to three Fifa World Cup tournaments and remains the only African country in history to win the Fifa World Youth Championships in 2009.

“We worked very hard for the victory against SA. The Black Stars played well and won on merit without any form of support from the officiating officials.

“The GFA call on Safa to responsibly accept defeat and show respect to the Black Stars' achievement on the field, for this is not the first time Ghana has defeated SA and this will not be the last time. In fact, every South African knows the pedigree of the Black Stars in football, a reason the team has a lot of following in SA.”

Motlanthe said the reference to “injury and violence” in the Ghanaian FA statement appeared to relate to a fake news story that has been spread in that country's media.

“It was not a real story. Ghana's FA must be careful about following fake news stories,” Motlanthe said.

The story claimed a Ghanaian, Yaw Owusu, was stabbed and murdered in a SA town called Mzuluku over an argument regarding the disputed penalty in Sunday's game. No such report has been made in the SA media, and TimesLIVE was unable to find any reference to any town called Mzuluku in SA.