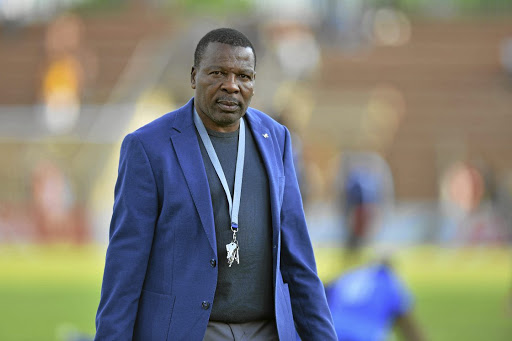 Sinky Mnisi of Royal AM says the club will subject itself to the processes of the PSL.
Image: Lefty Shivambu/Gallo Images

Royal AM CEO Sinky Mnisi has dismissed as “fake news” a tweet alleging to quote him as saying the club will not attend their Premier Soccer League (PSL) disciplinary committee (DC) hearing on Saturday for not honouring four playoffs matches.

The tweet on the official account of a well-known football Twitter news account alleged it quoted Mnisi as saying: “We went to court and the verdict will be announced at a later stage‚ so why should we attend the DC.”

The quote‚ or a matching story‚ did not appear on the same news source’s official website.

“I said last week‚ and I will repeat what I said‚ that we will subject ourselves to the processes of the PSL. And it still stands. Obviously our legal team will deal with the matter.  That is it‚ period."

Mnisi was asked if he could explain where the quote on Twitter had originated.

“I think somebody called me and I was speaking to them off the record‚” he said.

“I’m saying we will subject ourselves to the processes of the PSL‚ that’s one. Two‚ on record  our legal team are the ones who are handling this matter. They know what needs to happen.”

The DC hearing on Saturday is the latest event in the long saga involving Royal AM‚ the GladAfrica Championship’s (National First Division‚ or NFD) final standings and the PSL’s promotion-relegation playoffs.

An arbitration result before the final game of the NFD had awarded three points to Sekhukhune United regarding a game in February where Polokwane City did not field the required five under-23 players.

After the final round of results, this made Sekhukhune champions and up for automatic promotion to the PSL‚ and bumped Royal down to the playoffs.

Royal did not honour any of their four playoff matches‚ interpreting an interdict they had earlier obtained against the playoffs proceeding as applying  because they were applying to take their case to the Supreme Court of Appeal‚ which is an ongoing matter.

The PSL’s legal advice had been that the interdict fell away once deputy judge president Roland Sutherland had dismissed Royal’s leave to appeal to the high court‚ which had earlier upheld the arbitration ruling‚ so proceeded with the playoffs.

In a dramatic turn Royal this week took an application for PSL CEO Mato Madlala to be held in contempt for the league’s decision to continue with the playoffs.

The DC hearing on Saturday seems certain to uphold the rule of the NSL handbook for a no-show by a team that a 3-0 win awarded to the opposition. PSL prosecutor Nande Becker is expected to also push for a hefty fine.

The DC does not have the power to expel a club‚ but can recommend such drastic action to come before the PSL’s board of governors.