France's Giroud at the double after Benzema injury scare 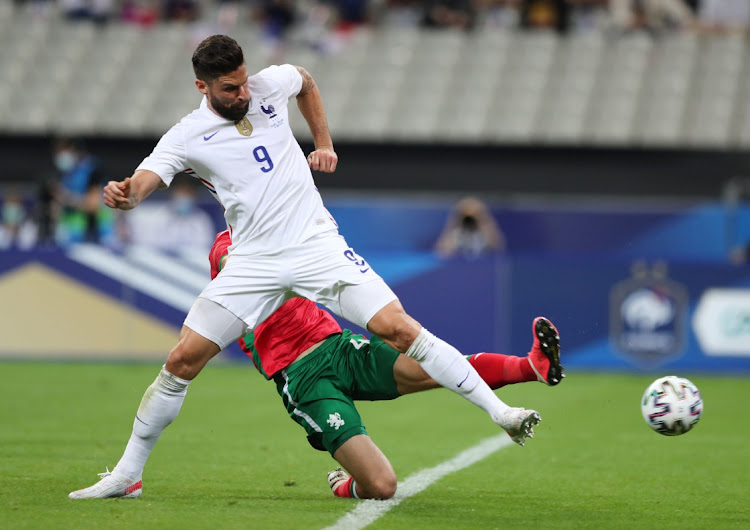 France substitute Olivier Giroud made the most of his time on the pitch with a double as the world champions beat Bulgaria 3-0 in their final Euro 2020 warm-up game after fellow forward Karim Benzema came off with a possible knee injury.

Les Bleus dominated the match and combined well up front with Antoine Griezmann netting a bicycle kick and Giroud, who has had very few chances to play at Chelsea this season, scoring his 45th and 46th international goals after replacing Benzema.

Benzema, playing his second game for France after a hiatus of more than five years after a blackmail scandal over which he faces a trial in October, came off in the 41st minute and coach Didier Deschamps said he wanted to take "no risk" with him.

France start their Euro campaign against Germany in Munich next Tuesday before taking on Hungary and European champions Portugal in a tough Group F.

"There were a lot of good things. I've been able to spare a few players as I was allowed six substitutions. Now we know what to expect, it's going to be much more difficult on the 15th (against Germany)," said Deschamps.

"The competition is about to start and that's the only thing that matters."

The game was attended by 5,000 fans almost eight months after Les Bleus last played in front of a crowd versus Portugal.

France striker Kylian Mbappe threatened from the start, finding Benzema in the box only for the Real Madrid forward's low shot to go just wide before Bulgaria goalkeeper Daniel Naumov was at full stretch to stop a shot on the turn.

France suffocated their opponents but, for all of their collective talent, it was a moment of brilliance from Griezmann that put them ahead in the 29th minute as his slightly deflected overhead kick beat Naumov.

Benzema then landed awkwardly after a header and asked to come off as he held his knee just before the break.

"It's a knock on the knee, which also affects the muscle. He felt he was getting stiff so he asked to be subbed," said Deschamps. "The medical staff are taking care of him."

Griezmann had another chance but Naumov was on top form and the Bulgarian was at it again to deny Giroud from close range on the stroke of halftime.

Deschamps made several changes during a quieter second half, with key midfielder Ngolo Kante being replaced by Thomas Lemar in the 65th minute.

Griezmann was also spared as he was replaced by Ousmane Dembele one minute later.

Giroud made the most of his opportunity as he cut home Benjamin Pavard's cross at the near post in the 85th and tapped in Wissam Ben Yedder's cross in added time to narrow the gap with France's all-time top scorer Thierry Henry to five goals.