Boks must be on their toes against All Blacks — Am

Visitors will be itching to turn fortunes around in Mbombela after embarrassing series loss to Ireland, says back 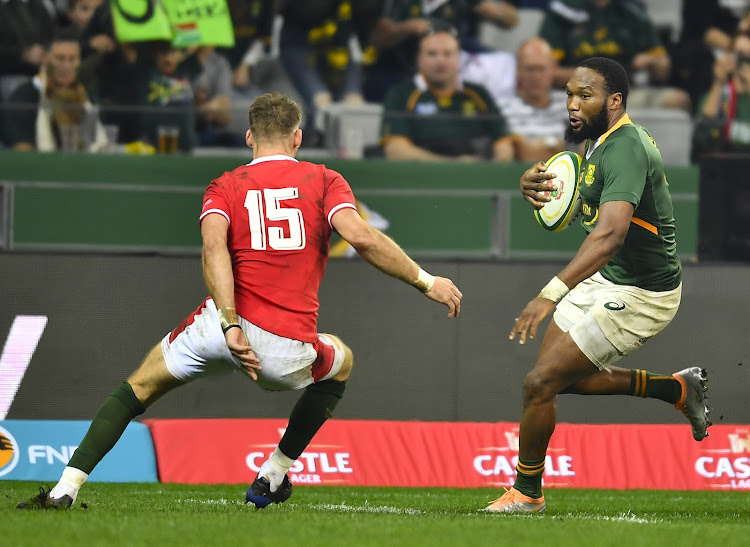 COMING THROUGH: Lukhanyo Am charges forward for the Springboks during the third Castle Lager Incoming Series Test match against Wales at the DHL Stadium in Cape Town
Image: ASHLEY VLOTMAN/GALLO IMAGES

The Springboks must ensure they deliver their A-game for the full 80 minutes against a wounded All Blacks team in Mbombela next Saturday, SA’s dazzling back division star Lukhanyo Am says.

After a hard-fought series win over Wales, the Boks face the All Blacks in Mbombela and then in Johannesburg a week later, before embarking on a three-match tour to Australia and Argentina.

A capacity 40,000 crowd is expected to pack the Mbombela Stadium to watch the Boks take on an All Black side reeling after a series defeat against Ireland.

With their backs to the wall, Am says the Boks will have to be at their best to repel what is expected to be a furious onslaught from the New Zealanders in the opening game of the Rugby Championship.

“When you face the All Blacks they are one of the teams where you have to ensure you are on your A-game all the time,” the Qonce-born Am said.

“So as a team we have been preparing as much as we can.

“We all know we will be facing a different threat compared with what we faced against Wales.

“The Boks are busy doing their prep and we are trusting that will put us in a better place for the Test next week.”

“It will probably be a little different from the challenge we faced against Wales,” he said

“If you look at New Zealand and the athletes they have and the skillset they have available to them, it will probably be a game built around a lot of continuity.

“Also maybe moving the ball around a bit and they also do not shy away from set-piece battles, which they showed against Ireland.

“So I think it is going to be a blend of set-piece battles and probably a bit more continuity compared with what we saw in the Wales series.

“In saying that, I thought Wales kept the ball alive against us and kept good continuity going.

“I think it is going to be a challenge like that [against the All Blacks].

“Our goal is to improve and get better.

“Obviously, not having played any rugby when Wales were our first game for 2022, you almost get a bit of a marker as to where we are.

“Then we tried to build during the Wales series.

“I think the main thing for us is to control and fix things in our game.

“We were by no means perfect against Wales.

“We had a nice review on Monday and had a reality check of where we are and what we have to improve.

“The team looked at what goals we set in the Wales series and where we excelled.

“In some instances, we thought we actually showed some good growth and in others, we did not show as much growth.

“So at the moment it’s about fixing our own stuff.”

Nienaber would not be drawn on whether experienced campaigners Duane Vermeulen and Frans Steyn would be considered for the opening game against the All Blacks.

Vermeulen and Steyn missed the recent 2-1 series win over Wales due to respective knee and hamstring injuries and the Boks’ medical staff will monitor their progress over the coming weeks.

“I think the main thing is they must handle this week’s load and we are only on Wednesday,” Nienaber said.

“Then we still have Friday to come for us and then obviously next week.

“Then we must make a decision as coaches.

“Duane has not had a rugby session with us as yet, so I think it would be tough to get him in the mix.

“Frans is in training sessions.”