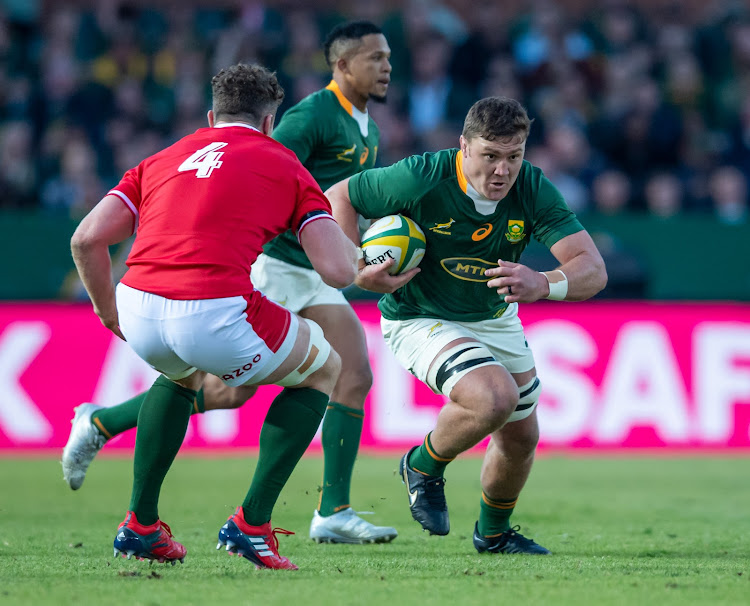 Jasper Wiese of the Springboks in action during the Incoming Series match between South Africa and Wales at Loftus Versfeld.
Image: Anton Geyser/Gallo Images

The Springboks launched a spirited second-half comeback to narrowly beat an inspired  Wales 32-29 in the first of three Test matches in front of a packed and raucous Loftus on Saturday.

Though the Boks emerged victors, it must be said that they were lucky to be on the right side of the score as their work was far from polished with most of the players committing elementary mistakes.

What was even more disappointing was that they gave this largely uninspiring performance in front of a Loftus that was packed to the rafters with almost 52,000 spectators.

This was an anticipated match as it was the first time Boks played in front of a full house since they won the Rugby World Cup in Japan in 2019 but they looked completely disjointed.

Going into this match, the spotlight was firmly on Elton Jantjies who was picked ahead of Handrè Pollard and he did not do himself any favours as he dished out possibly his worst performance in a Bok shirt.

Though the Boks were not overly impressive, there were eye-catching performances from Jasper Wiese with his marauding tackles and excellent carriers.

Then there was Damian Willemse who looked more assured with the boot than Jantjies and kicked the penalty after the hooter to secure this narrow win for the Boks.

When Willemse found the middle of the poles with his decisive penalty, the game was tied 29-29 and seemingly headed for a draw.

The Boks take a 1-0 lead in the series but they will have to produce a much improved performance during the second match in Bloemfontein on Saturday against this stubborn Welsh side.

After a beautifully sang national anthem, the home crowd was silenced inside three minutes when Wales stole a line-out to launch an attack that ended with scoring in the corner.

Wales increased their lead to eight points a few minutes later from the clever boot of Dan Biggar who was well-positioned in the 22-metre area to find the middle of the poles with a drop goal.

Shortly afterwards, Jantjies watched in disbelief when his penalty kick bounced off the poles but he atoned for his earlier mistake by slotting over his second of the day later.

This match quickly developed into a kicking contest as Biggar put away his first penalty but Jantjies’ effort shortly after went wide off the target from a good position.

Wales further increased their lead just after the half-hour mark when Rees-Zammit pounced on a loose ball that fell on his path for his second try of the afternoon.

Wales suffered a blow three minutes from the break when their influential captain Biggar was sent to the sin bin for a cynical infringement close to his try line but the Boks could not take advantage.

The Boks were the first to get the scoreboard ticking in the second half when hooker Bongi Mbonambi powered over the try line after a well-taken driving maul.

The try was more about relief for the Springboks as it came shortly before Biggar was to return to the field after he saw yellow three minutes before the halftime break.

The Springboks reduced the deficit with a try by Malcolm Marx that was a result of another powerfully taken driving maul but another penalty saw Biggar put away his third penalty.

Biggar scored another penalty as they further increased their lead but the Boks roared back into the match with a Cheslin Kolbe try that was converted by Damian Willemse.

The Boks were awarded a penalty try before Dewi Lake levelled the scores but Willemse proved the decider with his late penalty.