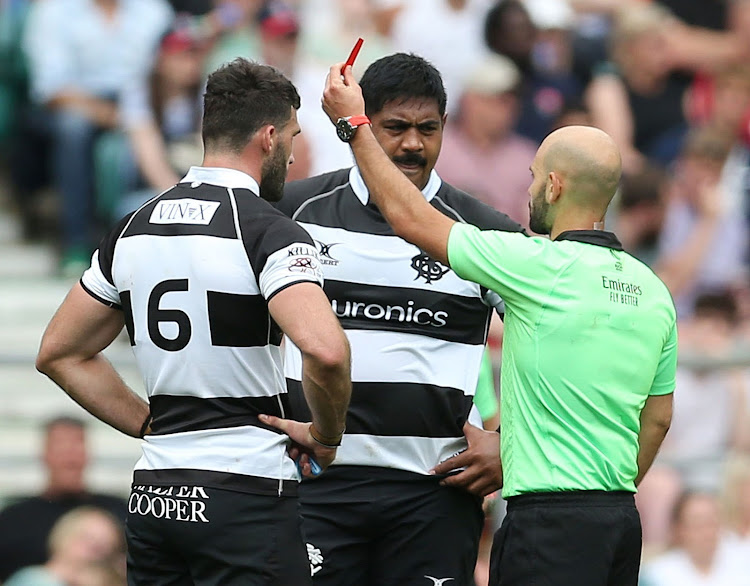 Will Skelton of Barbarians is shown a red card by referee Andrea Piardi during the International against England at Twickenham Stadium on June 19, 2022 in London
Image: Steve Bardens/Getty Images

World Rugby has changed its Graduated Return to Play (GRTP) protocols which will now require elite players with concussion symptoms to avoid playing for a minimum of 12 days, the sport's governing body said.

World Rugby added that no player will return earlier than the seventh day after their injury, even if they show no symptoms, and their return will have to be approved by an independent concussion consultant.

In most cases the new protocols, which will come into effect form July 1, are likely to prevent players from returning to action for their team's next game the after weekend.

The protocols were amended after the latest review of scientific evidence and research by World Rugby's independent Concussion Working Group, and officials said the changes were not in response to “external criticism” of some recent high-profile cases where seemingly concussed players returned to action within a week.

“It's not just a new protocol, it's going to be a new mindset for coaches and players,” World Rugby's chief medical officer Dr Eanna Falvey said in a statement.

“We recognise that there are differences in concussion symptoms and concussion history and this process enables us to further protect elite players by individualising their rehabilitation.”

In 2020, a group of former rugby players filed a class-action legal case against World Rugby and other governing bodies, alleging that their failure to protect them led to early onset of dementia.

The latest move on the recognition and treatment of concussion goes hand-in-hand with the game's attempt to cut down the frequency of incidents that cause it.

In recent seasons there has been a radical shift in what is now deemed dangerous on the pitch, with yellow and red cards now frequently shown for collisions that would previously have been written off as accidental.

The overall aim is to educate players to tackle lower, minimising the risk of shoulder-to-head or head-to-head contact, which is responsible for a high proportion of concussion incidents.

Saturday's English Premiership final between Leicester and Saracens featured a yellow card for each team for a shoulder-to-head contact, while Will Skelton became the first Barbarians player to be shown a red card — for a dangerous tackle — in Sunday's game against an England XV.

“Rugby is a game that bring immense benefits to those who play, benefits which far outweigh the risks,” said World Rugby CEO Alan Gilpin.

“However, we know that any collision sport such as ours will result in injury and it is incumbent upon us to provide our players with the best advice we can and that is exactly what we’re doing with these Individualised Rehabilitation protocols.”

International Rugby Players Head of Player Welfare Conrad Smith said: “The key to this working — and the important part in changing the culture around concussion — is that players report their head injuries and any symptoms.

“Seeing first-hand the amount of work and research that is going into this extremely complex issue, I have confidence in the approach taken and that the authorities are looking after the player’s best interests.” — Reuters