Leicester, Saracens face off in battle of comeback kings 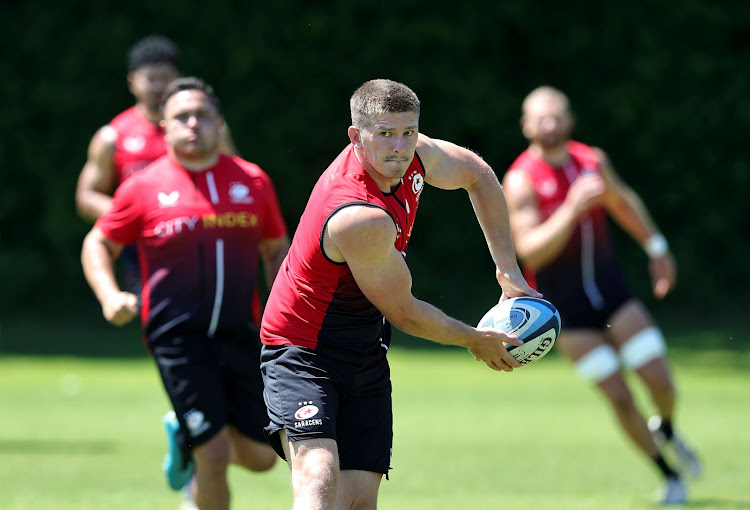 Owen Farrell passes the ball during a Saracens training session ahead of the Gallagher Premiership Rugby final on June 14, 2022 in St Albans
Image: David Rogers/Getty Images

Leicester and Saracens, the two most dominant teams in English rugby this century, are battling to be crowned Premiership champions on Saturday having both staged remarkable recoveries from finishing in the bottom two only two years ago.

Leicester are England’s most successful side and when they won their 10th title in 2013 they were appearing in their ninth successive final.

Few would have predicted it would be nine years until they returned to Twickenham and, after losing four successive semifinals to 2017, that it would be 2022 before they again made the playoffs.

Such an outcome looked even less likely when they finished second-last in 2020, kept off the bottom and avoiding relegation only because of Saracens' huge points deduction for salary cap offences.

Their recovery under head coach Steve Borthwick has been remarkable as they climbed to sixth last season and this year topped the standings from first week to last, winning 20 of their 24 games.

The former England captain has reinstalled the bloody-mindedness that made Leicester so hard to beat in their glory years and that helped them win a testing semifinal against Northampton despite being on the back foot for much of the game.

As Leicester's dominance of the league faded, Saracens stepped up, winning five titles from 2011-2019 before they were derailed so spectacularly with their enforced demotion.

A year in the Championship appeared to do them little harm, however, as most of the squad remained, with a handful spending time on loan at Premiership clubs before returning this season.

Saracens can certainly match Leicester for tenacity, commitment and ability to perform in the biggest games.

That spirit is epitomised by flyhalf Owen Farrell, who looks his freshest for years after spending five months on the sidelines with two serious ankle injuries and who drove them relentlessly through the semifinal win over holders Harlequins.

Up against him at Twickenham on Saturday will be his lifelong friend and rival George Ford, making his last Leicester appearance before moving to Sale on the back of his 22-point man of the match display in the semifinal.

Leicester's England fullback Freddie Steward has seen them both close up.

“Owen is a guy who will turn up as the Saracens talisman. He is brilliant and it's an exciting challenge to come up against one of the best flyhalves in the world,” Steward said.

“George is incredible — one of those players you appreciate more when you play with him. The time he creates for others and how he puts them into space — he's magical.” — Reuters