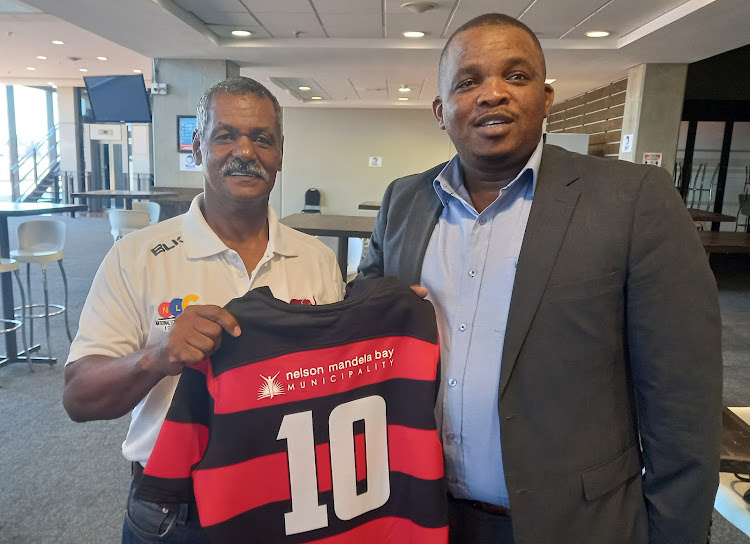 EP had a golden opportunity to revitalise schools rugby and to involve the community now that the Elephants were playing top tier rugby again, deputy mayor Thsonono Buyeye said.

Buyeye was speaking at a function to unveil EP’s new jersey, which has Nelson Mandela Bay Municipality’s name branded on the back.

Buyeye confirmed that the municipality had budged R6m to assist EP rugby.

“Schools rugby must be revitalised by EP rugby playing at the highest level,” he said.

“Those are some of the things we expect EP rugby to drive.

“We will also be looking to see if development is happening.

“If it means we must relook at the sponsorship, we will do that.

“We are supporting rugby because we want children to play sport.

“Children want to play sport where the teams are winning.

“We want to see you [the players] in the communities.

“Children must want to be part of this and communities must own this brand.

“They must be part of it and you must make them feel like this is their team.

“It is not your team, it is theirs.

“But for now, we wish the team well in the Preparation Series.

“The city is behind you and we want you to know you are representing the NMB brand.

“When you come to the field, you must know you have that pressure.

“It [the pressure] is not from us, it is the name on the shirt of Nelson Mandela.

“We will not turn our backs on rugby.”

Buyeye said everyone was aware of the challenges EP had faced in recent times.

“It is beautiful that we have reached this stage now after all that has been happening with rugby in the city,” Buyeye said.

“We have been following this and we know the challenges EP have had to overcome to get to where they are today.

“It is beautiful that we are standing here on the brink of top rugby coming back to our shores.

“It has been a while since we have had rugby of the highest quality.

“For us as a city, we are very proud to be a part of this.

“On behalf of the residents of the city, we decided as council to make sure we support rugby.

“We know what this region has produced in terms of rugby over the years.

“We know what rugby has done in the fight against apartheid, rugby was one of sports at the forefront of that.

“Growing up playing rugby and defying everything that was there is why we cannot turn a blind eye as a city and not support rugby.

“That does not come with a blank cheque, we are not saying we will support you irrespective.

“There are things as a city we expect from you.

“We have unveiled the new EP jersey with the Nelson Mandela Bay Municipality name on it.

“It is not just rugby but soccer and cricket. They are mainline sports in the country.

“We are sponsoring teams because we understand what sports do for the city.

“We know the economic spin-offs of us supporting sport.

“But that does not mean it should end there.

“We want to encourage [the] rugby [fraternity] to go out and look for sponsorship.

“We urge rugby to speak to the corporatesin the city and make them come back.

“Sponsors don’t want to associate themselves with brands that have issues like rugby has had in the last couple of years.

“We want to make sure rugby is run with clean governance and accountability so that the corporates can see there is a need for them to come back, in the spirit of rugby.

“We wish to thank the board which appointed Peter de Villiers as EP coach.

“We are very proud to have him as part of rugby in the city.

“We believe in his leadership and that he will steer the ship in the right direction.”