We will need to be at our best to overcome Irish women in T20 decider, says star Proteas batter 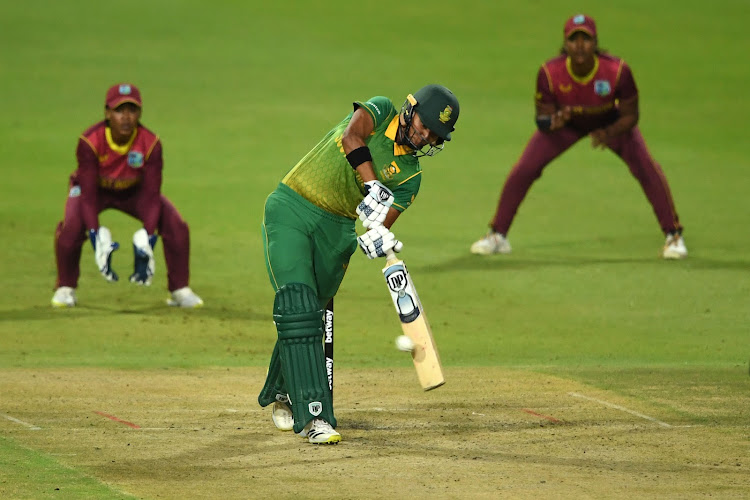 AIMING HIGH: The Proteas' Lara Goodall, seen here in action during a one-day international match against the West Indies in Johannesburg in January, is hoping for another good total in their T20 clash against Ireland
Image: Lee Warren/Gallo Images

Momentum Proteas opening batter Lara Goodall will be hoping to put in another match-winning performance in the series-deciding T20 clash against the Ireland women on Wednesday.

The left-hander led from the front as she scored a brisk 52 runs off 40 deliveries, her first half-century in the format, to help her side to a commanding eight-wicket victory in the second match.

“It has been a long time coming as I haven’t always been the first name on the team sheet in a T20,” she said.

“When I spoke to the coach, we spoke about it being an opportunity with a T20 World Cup coming early next year.

“I feel like getting an opportunity at the top of the order really suits my game, especially in this format, so I took it with both hands, but still take it one game at a time.”

Goodall also feels the need to take responsibility at the top of the order, even more so in the absence of some key senior players from the camp.

“No matter what team you play for, if you are an opener in T20 cricket you set the tone because the innings goes so quickly and when you look up again, it is eight or nine overs gone,” she said.

“So you cannot get lost in the game.

“It is about taking responsibility and getting the team off to a good start.

“I am just taking it one game at a time.

“It has been a while since I have been out on the park playing cricket since the World Cup.

“Now I just want to consistently get to 50s and then push on to 80s and 100s in the several formats we will play on this tour.”

Regarding their final encounter, Goodall said they would need to be at their best if they were to overcome the Irish women.

“I feel it wasn’t our best performance in the first T20.

“We just want to win cricket games and we know if we play at 80% of our abilities, we will win more games than we lose.

“Today we had a point to prove and that is when this team are at their best.

“When their backs are against the wall they come out stronger.”