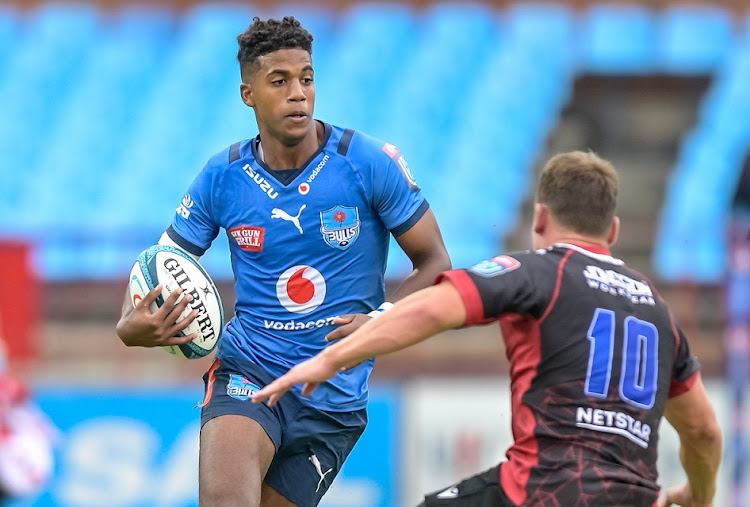 Canan Moodie of the Bulls in action against the Lions in their United Rugby Championship match at Loftus Versfeld on February 5 2022.
Image: Christiaan Kotze/Gallo Images

Bulls coach Jake White has declared utility back Canan Moodie as the “real deal” after his breakthrough campaign where he has established himself as one of the key players for the Tshwane side this season.

As a mark of his rising reputation as one of the best young players in the country, Moodie held his own under tremendous pressure from a Springbok-laden Sharks backline at the weekend.

He is again going to play a crucial role for the Bulls in their United Rugby Championship (URC) semifinal against Leinster on Friday, where they will aim to book a place in the final against the winner of Saturday's clash between the Stormers and Ulster in Cape Town.

White praised the 19-year-old junior Springbok for his versatility as he has successfully transitioned from wing to fullback.

“He’s gone from wing to fullback and it won’t be long before you ask me if he can play centre as well,” White said.

“He is a phenomenon, playing at this level against guys like Aphelele Fassi and Makazole Mapimpi and he didn’t look out of place. He didn’t look like he was lost. Defensively he was outstanding, he kicked for touch when they put him under pressure and I think he is the real deal.

“When you have Cornal Hendricks outside you and you’ve got senior guys like Harold Vorster and Marcel Coetzee running next to you, it definitely helps with your confidence. I think he will get better and better.”

White said the Bulls will be up against it against a top side in Leinster.

“ Leinster are going to be rampant this week but we have another chance to measure ourselves against an international side like them.

“We have to look after ourselves over the next few days, make sure we rehydrate and look after our bodies because we have a big match on Friday night.

“Leinster have been one team that has scored the most points in the first 20 minutes against everybody but they are beatable. You can’t let them start well because that is what they want to do.

“Sometimes you don’t get a chance to catch up when you get a good team like that.

“We will see how good we are on Friday night and how we have either grown or gone backwards. I would like to believe we have gotten better and let’s see what happens on the weekend.”