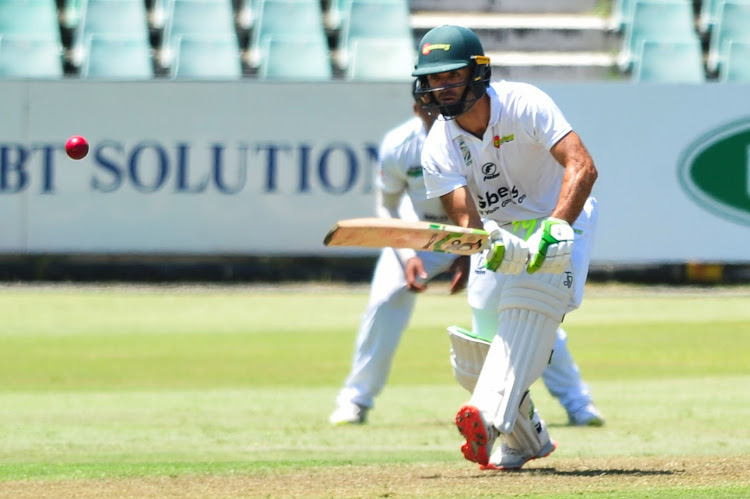 RUN CHARGE: Rudi Second of the Gbets Warriors on his way to a century on day one of the CSA 4-Day Franchise Series Division 1 match against the Hollywoodbets Dolphins on Thursday  in Durban
Image: DARREN STEWART/ GALLO IMAGES

Gbets Warriors captain Rudi Second led from the front with the bat as he recorded his 21st first-class century to give his side the upper hand after day one of their CSA 4-Day Franchise Series Division 1 clash against the Hollywoodbets Dolphins in Durban on Thursday.

Tristan Stubbs (35 runs off 73 balls) and Tiaan van Vuuren (15 off 29) were unbeaten at the crease with the score on 344 for six after 98 overs when stumps were drawn.

Winning the toss, the Warriors made first use of the Kingsmead pitch, getting  off to a fast start as openers Matthew Breetzke and Wihan Lubbe got their innings under way.

They brought up the Warriors’ 50  when Lubbe sent a Kerwin Mungroo delivery for a boundary in the 12th over.

Lubbe (30 runs off 42 balls) was first to be dismissed when he was caught by Waseem Rahman off the bowling of Eathan Bosch a few balls later.

Joined at the crease by Lesiba Ngoepe, Breetzke (41 off 66) kept the scoreboard ticking,  with the two adding t 40 runs for the second wicket before Breetzke was trapped leg before wicket by Daryn Dupavillon.

Ngoepe and Second then dug their heels in as the visitors moved past 100 in the 28th over.

The Warriors enjoyed lunch on 125 for the loss of two wickets.

The pair added 51 runs for the third wicket, as Ngoepe hit five boundaries on his way to 43 before he presented Marques Ackerman from a Kerwin Mungroo delivery.

Diego Rosier added only two runs to the total as Bosch claimed his second wicket of the innings when he trapped the former Titans man leg before wicket.

Wicketkeeper-batsman Sinethemba Qeshile got stuck in while Second chalked up a half-century to take the Warriors to 186 for four at tea.

The two looked to step on the gas a bit more, taking the Warriors past 200 with a well-struck boundary by Qeshile in the 64th over.

The Warriors were on 237 in the 75th over when Ackerman picked up his first wicket, that of Qeshile who tried a reverse sweep but only succeeded in edging the ball, which looped up into the waiting hands of Dolphins wicketkeeper Slade van Staden for 44.

Second’s moment of glory came in the 84th over when he struck his 13th  boundary of the innings as he brought up his 21st century in red-ball cricket while the Warriors took their score past 300 a short while later.

Bosch, the pick of the Dolphins bowlers with his three wickets for 56 runs in his 19 overs, claimed his third wicket when he bowled Second for 120 off 196 balls including 15 boundaries.