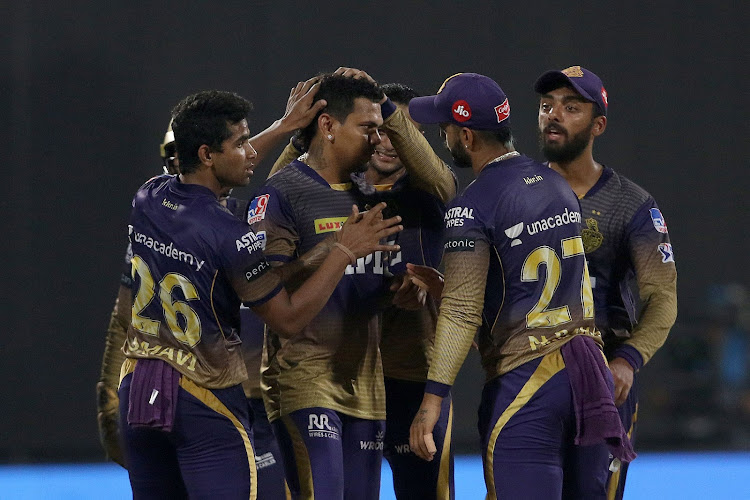 Sunil Narine of Kolkata Knight Riders celebrates the wicket of Glenn Maxwell of Royal Challengers Bangalore with teammates during the eliminator of the Vivo Indian Premier League at the Sharjah Cricket Stadium on October 11, 2021
Image: Rahul Gulati / Sportzpics for IPL

Sunil Narine shone with the ball and bat to help KKR win the nail-biter.

Bangalore won the toss and opted to bat first but despite scoring 53 quick fire runs in the powerplay, Narine (4-21) took advantage when the wicket slowed down and boundaries dried up, cleaning up the top order in the middle overs.

As the pressure to increase the run rate climbed, Narine first had Srikar Bharat caught in the deep, followed by Virat Kohli (39) who was bowled as the skipper completely misjudged a delivery while trying to heave him over mid-wicket.

The West Indies all-rounder then knocked over AB de Villiers for his third before Glenn Maxwell sliced the ball to short third man to leave Bangalore struggling at 112-5.

Bangalore eventually posted 138-7 in their 20 overs, failing to hit a single six in the innings.

"Their spinners dominated the game in the middle overs. They kept taking wickets," Kohli said in a post-match interview.

"We had a great start and probably should have tried to build on that. It was more about quality bowling instead of poor batting."

In response, Kolkata's openers Shubman Gill (29) and Venkatesh Iyer (26) set up the platform for the run chase even as Harshal Patel dismissed both to equal the record for most wickets in an IPL season (32).

Narine walked in at 79-3 just as Bangalore had their foot in the door and swung the momentum Kolkata's way when he cleared the ropes off the first three deliveries to put the pressure back on Bangalore.

Although Mohammed Siraj struck twice in the 18th over to dismiss Narine (26) and Dinesh Karthik, the experienced Shakib Al Hasan and captain Eoin Morgan led Kolkata home with two balls to spare.

Kohli, who is stepping down as Bangalore captain, said it was time someone else took the reins but confirmed he would stay loyal to the franchise.

"All I can say is that I've given my best. I've given my 120% to this franchise and will continue giving it as a player on the field," Kohli added.

"It's a great time to regroup and restructure the franchise for the next three years."

Kolkata will take on Delhi Capitals on Wednesday in the second qualifier, with the winner facing three-times champions Chennai Super Kings in Friday's final.