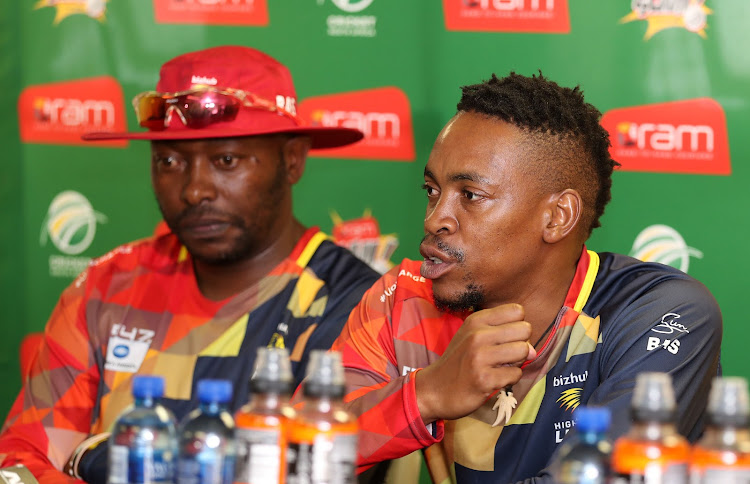 The Lions had one of their most successful periods with Geoffrey Toyana as head coach and Aaron Phangiso as captain, having swept up all domestic trophies on offer, when Ottis Gibson was appointed to replace Russell Domingo as SA coach.
Image: Muzi Ntombela/BackpagePix

Former Cricket South Africa (CSA) CEO Thabang Moroe has given a witness account of how erstwhile Proteas coach Ottis Gibson’s skin colour was allegedly used by powerful figures within the organisation to block the appointment of a more deserving Geoffrey Toyana as the national team coach to fill a vacancy left by Russell Domingo.

Moroe was testifying under oath on day 21 of the CSA Social Justice and Nation-building (SJN) transformation hearings.

Moroe told the inquiry that‚ as the chairperson of the cricket committee at the time‚ the committee identified Toyana and then Cape Cobras coach Paul Adams as prospective candidates to replace Domingo in late 2017.

But then board chairperson Chris Nenzani, said Moroe, sidelined the cricket committee from the shortlisting and interviewing process.

Moroe said Nenzani unilaterally appointed advocate Norman Arendse‚ who was then lead independent director and is currently serving on the CSA board‚ as the chair of the ad hoc committee tasked with appointing a new coach.

During this time‚ said Moroe‚ discussions at board level‚ and even in the media‚ were that Toyana stood head and shoulders above other coaches at the time.

“Although we were going through this formal process we all sort of felt Geoff was the guy. Only to be told that Geoff will not be the guy.”

The former CEO said it came as a surprise when the ad hoc committee announced that they preferred Gibson in September 2017‚ less than two years before the 2019 World Cup.

Moroe testified that Gibson was not suited for the Proteas job as he was residing in the UK and working as the England national team bowling coach.

According to Moroe‚ there was no compelling or exceptional reasoning to appoint Gibson.

Moroe said the other reason advanced by Arendse‚ as the chair of the interviewing panel‚ for Toyana’s snub was that the panel was not happy with the coach’s presentation skills.

“That was a concerning feedback to give to us because we were not hiring him to do presentations or public speaking. We wanted somebody who knew how to coach.”

Moroe said Nenzani and Arendse defended Gibson‚ from the West Indies‚ as black to silence the transformation debate.

Moroe testified that he‚ along with Arendse and Nenzani‚ welcomed Gibson at the airport.

He said they had hardly sat down for a meeting when Gibson immediately insisted on appointing his own support staff.

Gibson was appointed to win the World Cup and was adamant that he needed people he could trust if his mandate was to be successfully carried out.

The CSA board agreed that Gibson would have his way.

But‚ before officially appointing Gibson‚ said Moroe‚ the board had agreed to have Toyana as assistant and Adams as the spin bowling coach‚ and that there was consensus.

“A couple days later I got a call from Ottis asking that we meet, as he was ready for us to start the formalities in terms of appointing his support staff‚” Moroe testified.

Moroe said Gibson initially came with recommendation to hire a coach who was working in England who wanted a senseless salary that CSA did not budget for.

When it was rejected‚ Gibson came back and said he wanted Dale Benkenstein‚ who was coaching at a high school at the time‚ to be his assistant.

“I told Gibson I could not see myself supporting such a decision‚” Moroe testified.

Moroe said Gibson told him he was going to have meetings with franchise coaches and would revert on who he chose.

“Ottis came back and gave me feedback‚ and obviously negative feedback on Geoffrey Toyana‚ which was not surprising.

“He said he would prefer Malibongwe Maketa to be his assistant and that he likes his work ethic.

“That also surprised me, purely because Toyana and Adams were the most successful coaches in the country and Malibongwe had only been a franchise coach for one season.”

Gibson‚ said Moroe‚ inexplicably thought the franchise coaches were not up to scratch in terms of the person he was looking for.

TimesLIVE has established that according to Moroe’s submission‚ Gibson said some players in the Proteas setup felt that Toyana was aggressively pushing the transformation agenda and wasn’t going to look at players with sober eyes.

This is despite Toyana having won every domestic trophy on offer with a transformed team that fielded as many as eight black players on any given match.

“I immediately challenged Ottis and told him he would be on the selection panel and he‚ not Geoff‚ would be selecting players.

“Ottis then spoke about how he wanted his change room to be harmonious and peaceful and he didn't want a name that would spark controversy in his management team.”

“That was Toyana essentially dead and buried as a prospective Proteas coach‚ said Moroe.

“If you look at the coaches that I’m talking about‚ if you look at Geoff’s career‚ if you look at Adams’ career‚ immediately after these were made in terms of appointing Ottis and support staff‚ Geoff and Paul somehow started having misunderstandings with their own players at franchises.

“They started fighting with their own boards. There were articles about them and their (alleged) drinking problems in the media and how they were unfit to be coaching at this level.

“These are the inequalities that are glaringly there if you look at the landscape of SA cricket.”

That is how Toyana was “short-changed” by CSA and Adams overlooked for a role in the Proteas coaching setup‚ according to Moroe.

Toyana is expected to give his own testimony on Thursday.