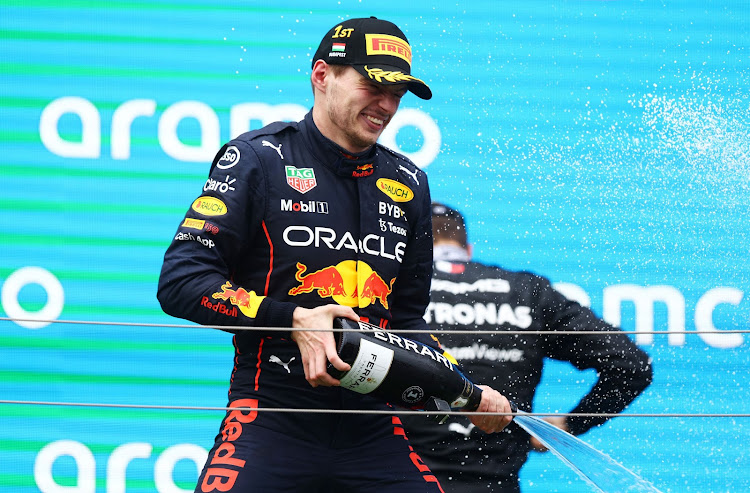 Race winner Max Verstappen of the Netherlands and Oracle Red Bull Racing celebrates on the podium after the F1 Grand Prix of Hungary at Hungaroring on July 31, 2022 in Budapest
Image: Francois Nel/Getty Images

“That’s of course not acceptable,” the Red Bull driver, who beat Mercedes rival Hamilton to last year’s title in a controversial season-finale, told reporters after winning the Hungarian Grand Prix.

“These individuals, I definitely don’t agree with that because that’s just disgusting.”

Verstappen, Formula One’s youngest race winner and the first Dutch world champion, has a legion of fans dubbed the ‘Orange Army’ that follow him around the world.

The next race in Belgium, where Verstappen was born, is another Orange Army stronghold with the Dutch Grand Prix at Zandvoort, the 24-year-old’s home race, following the week after.

The incidents in Austria prompted Formula One to launch its ‘Drive it Out’ anti-abuse initiative on Saturday.

Verstappen, sitting alongside second-placed Hamilton in the post-race press conference, said the majority of his fans were generally respectful.

“Overall I think the majority of the fans... which also were cheering a lot throughout the race and also on the podium for every driver, I think that’s how it should be,” he said.

“The video of burning merch, I think that’s disgusting,” he said.

Meanwhile, seven-time world champion Hamilton said Mercedes' form in Hungary on Sunday had fuelled his hopes of a first Formula One win of the season when he returns from the August break.

The Briton finished second ahead of team mate George Russell at the Hungaroring, with the pair chalking up their second successive double podium.

“If we are able to take this pace into the second half of the season, for sure we can start to fight with the guys,” Hamilton told reporters, saying second place behind Red Bull winner Max Verstappen was “hugely satisfying”.

“This is the first time we’ve been able to fight and battle with the Ferrari.

“That’s huge for us,” added the 37-year-old, who started seventh after suffering a problem with his rear wing Drag Reduction System (DRS) in qualifying.

The Hungarian weekend offered the clearest sign yet that Mercedes, who have struggled to get to grips with the sweeping rule changes introduced this year, are on the verge of rediscovering their groove.

The reigning champions are now just 30 points behind Ferrari and, with the Italian team’s challenge imploding, could even snatch second from the Maranello-based outfit in the overall standings.

Hamilton, winner of a record 103 races, acknowledged Red Bull had the faster car on Sunday with Verstappen starting 10th, spinning and still going on to win.

But, he added, Mercedes could have won had both cars started near the front.

“I think this weekend there was a potential for the win,” he said.

“We still have made huge progress and huge steps and so to have this consistency and two double podiums in these last two races, gives us great hope and a huge push for the second half.” — Reuters