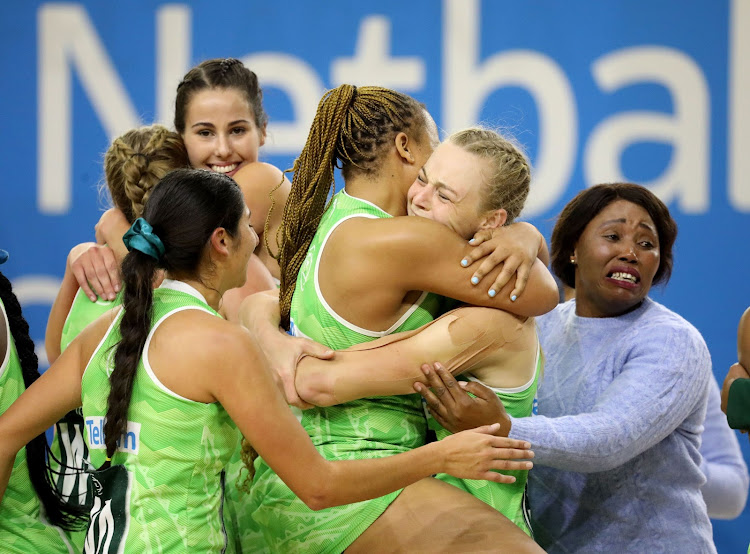 WE DID IT: The Eastern Cape Aloes celebrate after successfully defending their division two championship title at the weekend, as well as being promoted to division one of the Telkom Netball League at the Pretoria Heartfelt Arena.
Image: THULI DLAMINI

Aloes head coach Sameshia Esau could not contain her excitement after her team ended as the only unbeaten team in the tournament.

“We stepped into this game today just like it was just another game,” Esau said.

“I think my girls stood up from the start until the end. For that I am very proud of them.

“For a team that had only two practices at the start of this tournament, it was hard for me as a coach but it always pays off and you have to believe in your players as a coach.

The Aloes lost their division one spot to the Southern Stings back in 2014.

Kingdom Stars were promoted to division one in 2019, when they beat Gauteng Fireballs.

Aloes assistant coach Zandile Njeza said they were excited about winning the promotional match against the Kingdom Stars as cementing their place in division one had been their goal from the beginning.

Two more teams who suffered losses at the merciless hands of the Aloes were the Western Cape Tornados and Eastern Cape Comets.

The season ended with the Comets in sixth place on the division two log.

Comets assistant coach Milisa Mganu-Dom said she was disappointed about their final position.

“The log standing is a bit disappointing because this season the girls were capable of getting to the top four, which we had set our minds on,” Mganu-Dom said.

“As for us being beaten by the Aloes, the Eastern Cape derby is always a good game.

“The Comets fought and fought, but the Aloes were just the better team and as their sister team we are very proud of them.”

In division one the Gauteng Golden Fireballs made history when they played and won their first TNL final, dethroning the defending champs, the Gauteng Jaguars, by a close 35-32.