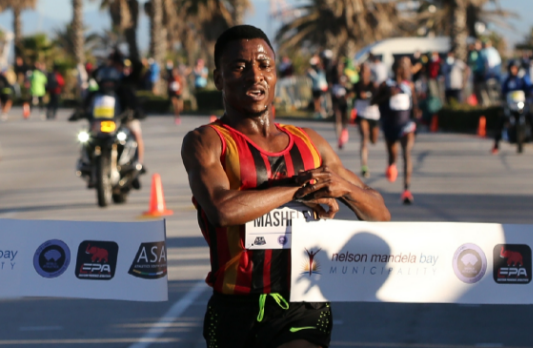 The Nelson Mandela Bay Half-Marathon is back in full force and will take place at Pollok Beach in Summerstrand on June 4.

EPA is gearing up for the return of the full race, as Covid-19 limitations in 2021 only allowed for a maximum of 250 athletes.

Race director Michael Mbambani is thrilled the race will be back in its entirety.

“With the support of our title sponsors, the Nelson Mandela Bay municipality, we are expecting about 1,500 athletes,” Mbambani said.

“We anticipate more than 20 international and foreign athletes from different countries like Lesotho, Kenya, Zimbabwe, Burundi and Ethiopia to compete in the race.

“All relevant Covid-19 regulations for athletes entering the country applicable at the time of the event will be adhered to.

“This year, spectators will be allowed to watch the race and the event will also be broadcast live on SuperSport.”

Precious Mashele narrowly beat Stephen Mokoka with an impressive finish in 2021 in 1.01.17, with the foreign contingent ensuring fast times in the women’s contest.

Brillan Jepkor Kipkoech of Kenya dominated the women’s battle to win in 1.07.32, with Sisay Alemaddis of Ethiopia in second place in 1.08.04.

Glenrose Xaba was the best SA athlete, in fifth position overall, earning the gold medal in 1.09.30.

Gqeberha’s top athletes are looking forward to the return of the half-marathon but said they were even happier to see that the racing calendar was jam-packed for 2022.

Frans, who finished 10th in the men’s race in 2019, said he was fit and healthy and the upcoming Run my City 10km in Cape Town this weekend would be a time trial test in preparation.

“I feel that I have grown up as an athlete,” a confident Frans said.

Gladwin Mzazi, 33, running for the Boxer athletics club, Gauteng, will also be competing.

“I am excited about the upcoming competition, especially now that it is a qualifier for the World Athletics Half-Marathon Championship, which will be held in the Chinese city of Yangzhou in November.

“My plan is to make the South African team, so if I can finish in the top five, I will be very happy,”  Mzazi said.

Popular Nedbank running club athlete Kelly van Vliet is training hard for the half-marathon and is confident that her preparations are going well.

“I am excited and nervous thinking about the race, but it is such an experience and honour to run and be surrounded with the best of the best athletes.

“My goal is simply to better myself and my personal best time,” Van Vliet said.

Nwabisa Mjoli of Ikhamva athletics club, who has had a strong running season to date, is comfortable that her preparations are going according to plan.

“My goal is to finish in the top 10  and try to qualify for the World Half-Marathon Championships.

“I would like to focus on improving my time but will have to see how my body feels on the day,”  Mjoli said.

At stake is not only the South African title, but also valuable World Athletics Ranking points, R80,000 for first place and a total prize pot of R277,500.

Athletes can enter online on www.webtickets.co.za or at major sports stores.

The closing date for online and manual entries is Saturday May 21. — LOC EP Athletics