Injury recovery was like a 'roller coaster', says Nadal 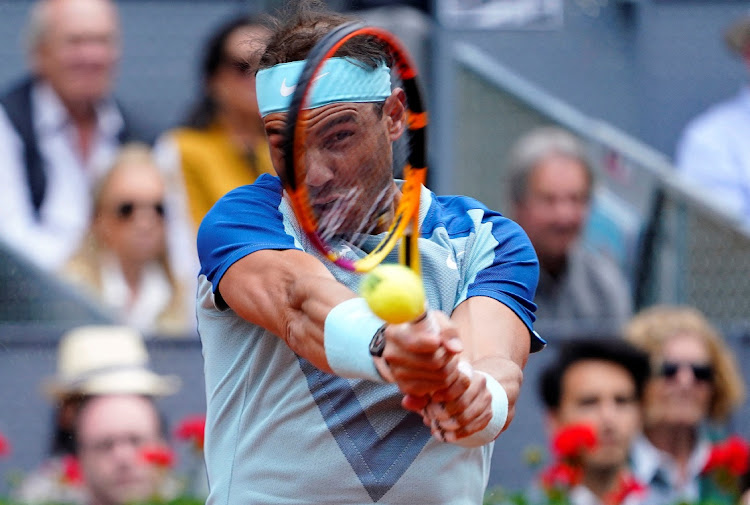 Spain's Rafael Nadal in action during his second round match against Serbia's Miomir Kecmanovic at the Madrid Open in Caja Magica, Madrid on May 4, 2022
Image: VINCENT WEST / REUTERS

Rafa Nadal said his recovery from a rib injury has been like a “roller coaster” after the 21-times major winner returned to action with a win over Miomir Kecmanovic at the Madrid Open.

The Australian Open champion was playing in his first event since picking up the injury at Indian Wells in March but showed little signs of rust, cruising to a 6-1 7-6(4) victory on Wednesday.

“I leave the match very, very happy. You have to be sincere with yourself ... my preparation has not existed. You cannot expect great things at the beginning,” Nadal told reporters.

“All trainings have had some up-and-downs, it's been a roller coaster. I have had better days, worse days.

“At the end of the day, the rib is a problem that limits your game a lot.”

The Spaniard added that training had been difficult due to the nature of the injury but he was not worried about his lack of preparation ahead of the French Open later this month, where he will be bidding for a record-extending 14th title.

“There are injuries that allow you to do physical work, aerobic work. The rib has not allowed me to do anything ... but I'm not worried. I just think that every minute that I am out there on the court is something positive,” the 35-year-old said.

“I don't have any pain in my rib. I had a little bit of pain at the beginning of the week, and then I went to get an MRI so they could check it, Friday or Saturday when I came here, and the image on the machine was good.”

Greece's Stefanos Tsitsipas cruised into the next round after a 6-3 6-4 win over France's Lucas Pouille.

Jabeur won 77.8% points on her first serve and converted four of five break points against twice champion Halep to seal victory in just over an hour.