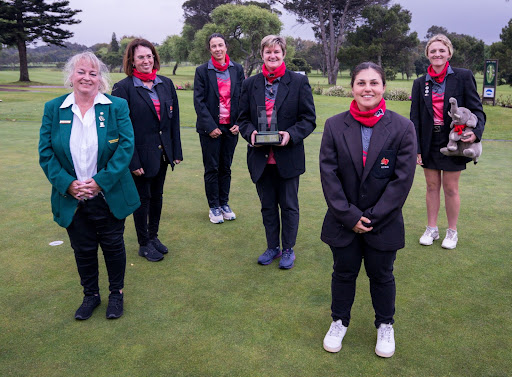 Eastern Province emerged victorious in the battle for supremacy to secure the coveted promotion in the 60th SA Women’s Inter-Provincial after an epic scuffle on the final day at Rondebosch Golf Club.

Border looked locked in to win the B-Section, having claimed the top spot with an eight-stroke victory in the seeding round and beating Eastern Province and North West 4-2 in the first two rounds.

The WGSA 72-Hole Teams Championship B-Section winners headed into the final round with a two-point lead, but Eastern Province was far from beaten.

“We knew the match between Border and Free State would be tight.

“If Free State won the match, or the two teams, drew we still had a chance, so we took the fight to North West,” the team’s captain, Janine van der Merwe, said.

The skipper’s strategy paid off handsomely.

Van der Merwe and Heather Kruger went out first in the foursomes, but before they could even win their game three and two, youngsters Mieke de Ridder and Zahn Scholtz collected the side’s first point with a five and four win.

“The organisers asked us if we were playing speed golf, because we raced through that morning session in just two hours, but we were pretty motivated.

“And when we learnt that Border and Free State had tied their foursomes it only inspired us more,” Van der Merwe said.

Both players won 5 and 4 to boost their tally to four points.

De Ridder made it five points when she edged experienced Elru Botha two and one with a clutch birdie on the 17th.

Van der Merwe was one up through 16, but Marne van der Merwe birdied 17 to square the game and the North West golfer denied Eastern Province a clean sweep when she halved the final hole in bogeys.

“We were all tied on four points, so the result went to a count-out on game points; Free State had 10, Border had 10.5 and we edged them with our 12 points for the win, thanks to our final round effort,” the elated captain said.

“We never looked further than the next step and we took our matches one at a time.

“We came together so well and with the most amazing spirit.

“I believe it was down to our unity that we could pull it through.

“I never doubted that we could do it and we are very proud.

“A big thank you to our manager, EP Women’s Golf president Cathy Bezuidenhout, who was an absolute rock.

“And to Women's Golf SA, GolfRSA and Rondebosch Golf Club, who put up a fantastic event.”

Van der Merwe not only guided her charges to victory, but the 54-year-old also topped the Most Valuable Player list with 5.5 points.

First-time SA Women’s IPT campaigners Jordan Pillay and Leonine Petit were simply supreme for Western Province B, finishing the week as the only unbeaten players in the bottom draw.

Backed up by fellow rookies Isabella Crafford and Jemma Louw, the young team won three straight matches to seal a double win for Western Province in the 2021 tournament.