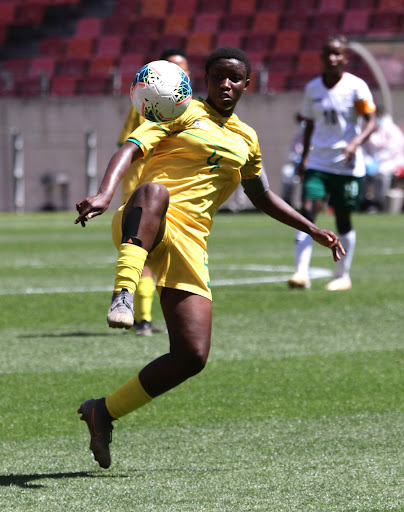 Disappointment was etched on the face of Banyana Banyana coach Desiree Ellis after her team lost the bronze medal match to Zambia in the Cosafa Women’s Championship on Saturday.

The SA women’s national team lost 4-3 on penalties after the match ended in a 1-1 draw at the Nelson Mandela Bay Stadium in Gqeberha.

Banyana, who have seven Cosafa title wins under their belt, failed to collect a fifth consecutive cup after they lost 3-2 to Malawi in the semifinals on Thursday.

Again, Banyana failed to bring their A-game against Zambia after a series of substandard performances in the Cosafa Cup in 2021.

“I felt we started really well, but then Zambia came back into the game,” Ellis said.

“We conceded poorly yet again, so we had a few things to say during halftime.

“We had to make an early change because of an injury with Mamello [Makhabane] coming out.

“This also  meant we had to drop Sibulele [Holweni] a bit further back and the drive we had going forward was lacking at the time.

“But we got back into the game and we had a few good opportunities, and then penalties are always a lottery.

“We were up and down.

“We talk about consistency, but we were not consistent and yet again one of our strongest points, our defence, let us down as we couldn't keep a clean sheet again.

“I am not happy. I don’t think anyone can be happy because we are better than this.”

Ellis said she hoped they would get their house in order for the CAF African Women Cup of Nations Morocco 2022 qualifiers against Mozambique.

“Now it is all guns ahead getting ready for the qualifying, which is going to be just as important and it’s not going to be an easy game against Mozambique,” she said.

Banyana play against Mozambique home and away in the first round of the qualifiers.

Whoever comes out top in those fixtures will play against the winner between Algeria and Sudan in two-legged matches in the second round.

Banyana’s Holweni ended the Cosafa competition as the leading goal scorer with five goals and she will be key in the Mozambique qualifiers.