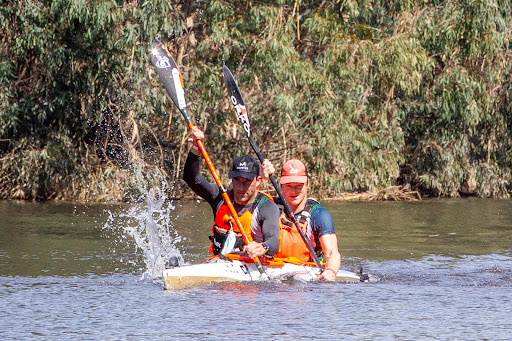 A Breede win and a pre-Fish victory will see the pair of Andy Birkett (front) and Nick Notten go into this weekend's Fish River Canoe Marathon as the favourites
Image: John Hishin / Gameplan Media

The appetite for the 2021 Fish River Canoe Marathon is evident in the stacked entry list of potential race winners for this year’s South African K2 River Marathon Championships starting on Friday at Grassridge Dam.

After the event was cancelled in 2020 due to the Covid-19 pandemic the canoeing fraternity will turn out in their numbers for the 39th edition of the famous race in the Klein Karoo and looking at the potential winners of the men’s and women’s races it’s going to be an exciting two days of racing.

On the men’s front the Euro Steel pair of Andy Birkett and Nick Notten will be the favourites for the title. The pair has had a strong build up to the race with victory at the Breede Canoe Marathon as well as the Pre-Fish so they will be in good form.

They haven’t had the burden of international travel this week unlike two of the other title contenders.

Hank McGregor and Hamish Lovemore finished sixth at the recent ICF Canoe Marathon World Championships and they will be in good race form coming from Romania.

In one of the most exciting entries into the men’s race defending men’s champion Jasper Mocké has called on the services of French marathon star and former Fish runner-up Cyrille Carre.

Carre recently finished third in the K2 race at the Canoe Marathon World Championships and Mocké will always be in the mix at the Fish so they are likely to be right up there after the two days of racing.

Young David Evans and Sam Butcher will be an exciting pair to watch over the two days as will the Under 18 pairs of Josh Simpkins and Matt Coetzer and Matt Millward and Jack Edmonds.

The women’s race will be just as exciting when they set off at 7.10 on Friday morning.

For the Mackenzie/Hartley pair 2021 could provide redemption as they pair up again for the race.

There are two other women’s pairs that could prove to be tricky for the race favourites to shrug off.

The first is Jordan Peek and Pippa McGregor. McGregor has started paddling competitively and Peek has had a solid 2021 season with a runner-up finish in both the MyLife Dusi and the Berg earlier in the year.

The East London duo of Nikki Birkett and Jade Wilson will also ruffle some feathers over the 82km’s from Grassridge Dam to Cradock.

Despite the current Covid-19 pandemic, the amount of race entries has continued the trend of growth of paddling and despite the strict adherence to all protocol paddlers are coming out in their numbers to race. — Gameplan Media