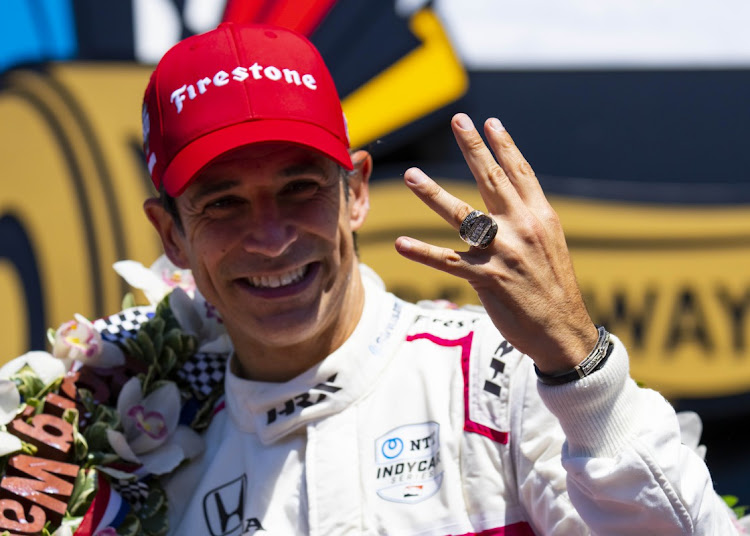 IndyCar Series driver Helio Castroneves holds up four fingers for his four Indianapolis 500 wins as he celebrates winning the 105th running of the race at Indianapolis Motor Speedway in Indianapolis, Indiana on May 30, 2021
Image: Mark J. Rebilas-USA TODAY Sports

In more than a century of racing at the famed Indianapolis Motor Speedway (IMS), only three drivers - AJ Foyt, Al Unser Sr. and Rick Mears - had previously won the 500 four times.

With this victory, Castroneves becomes the first non-American to join the group.

Castroneves' chances of joining this exclusive club were looking doubtful last year when powerhouse Team Penske, who provided cars for all three of his previous wins (2001, 2002, 2009), cut ties with the 46-year-old.

But Meyer Shank Racing rescued the bubbly Brazilian and he rewarded the small outfit with a poised drive, taking the lead with two laps to run and holding off a challenge from Spanish young gun Alex Palou.

Castroneves made it clear to fans in a trackside interview following the win that there was more to come.

"I only did two races this year and I won two. It's not the end, it's the beginning," said Castroneves, who was also part of the winning team at the 24 Hours of Daytona. "I think I still got it, don't you think?"

Without a full-time ride, the normally easy-going Castroneves had arrived in Indianapolis with a chip on his shoulder and a something-to-prove focus.

"They promised to give me a good car - just give me a chance to fight and I will be up there," he said.

The Brazilian's 12-year gap between wins is the second-longest in Indy 500 history behind Juan Pablo Montoya's 15-year wait between victories in 2000 and 2015.

Meyer Shank Racing has not committed to anything more than part-time employment for Castroneves but the team did say he will have a shot at an historic fifth win next year if he wants it.

"I believe Helio deserves to go for a fifth Indianapolis win," said owner Mike Shank. "We're going to do everything we can to make that happen for him."

Congratulations poured in from around the motorsport world for Castroneves, one of IndyCars' most popular personalities, both with fans and fellow drivers.

Among them were Foyt and Mears who welcomed the first new member of the four-time winners' club since Mears won his fourth 30 years ago.

"He did a hell of a job today," said Mears, who as a Team Penske mentor had helped Castroneves to his previous three wins. "He's always been good around this place and he's still got the fire."