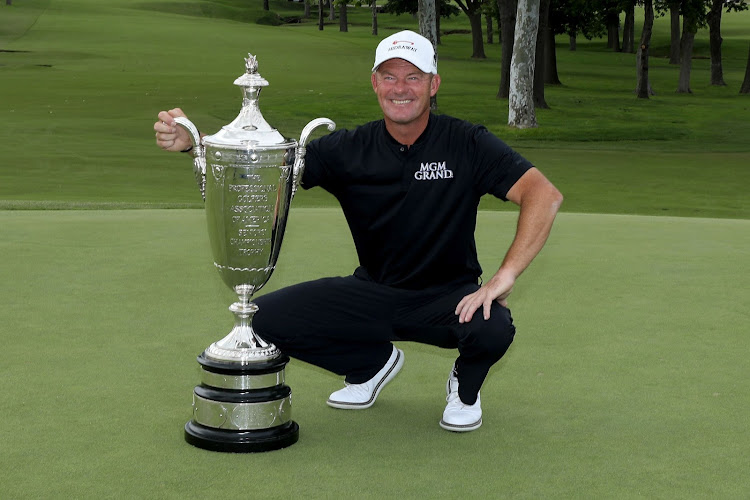 Alex Cejka of Germany poses with the trophy after winning the Senior PGA Championship at Southern Hills Country Club on May 30, 2021 in Tulsa, Oklahoma.
Image: Dylan Buell/Getty Images

Alex Cejka only got into his first major tournament earlier this month because Jay Haas withdrew.

Cejka shot a 3-under 67 on Sunday and cruised to a four-shot victory over Tim Petrovic in the KitchenAid Senior PGA Championship in Tulsa, Okla.

"The majors are still difficult to win. Of course two is great," Cejka said after the victory. "I've never thought of it. I mean, of course it's everybody's dream when you see this trophy, how can you not try as hard as you can to win this? It wasn't a fluke.

"Yes, there is maybe potential for more, but as I said, a lot of great players every week and a lot of the majors, you got to play really well. I wouldn't be disappointed if I never ever win a major again. But right now I have two."

Cejka won the Regions Tradition three weeks ago when he beat Steve Stricker in a playoff.

Ironically, he trailed Stricker by one shot entering Sunday but a showdown didn't occur. Stricker shot 7-over 77 to finish in a tie for 11th at 1-over 281.

Meanwhile, Cejka carded six birdies against three bogeys in his final trip around Southern Hills Country Club. He shot 34 on the front nine and 33 on the back.

Despite there being no real threat to overcome him, Cejka didn't feel secure about the win until his final putt on 18 landed in the cup.

"I really wanted to finish it," Cejka said. "I didn't want to celebrate too much. I know you have three, four shots cushion, (but) in golf everything is possible. I wanted to really be calm until the ball is in the hole, until I sign my scorecard, everything is right.

"I mean there's been a lot of scenarios over all those years, so but I was happy. I'll tell you, I was pretty nervous the last four, five holes."

Petrovic also had six birdies and three bogeys but was unable to make a valid run with Cejka cruising along.

"Actually they came back to us early on the front nine and we were right there," Petrovic said. "But Alex put the gas on and probably hit some good iron shots. I wasn't really looking."

Stricker's porous round included eight bogeys and one double-bogey. He also had three birdies.