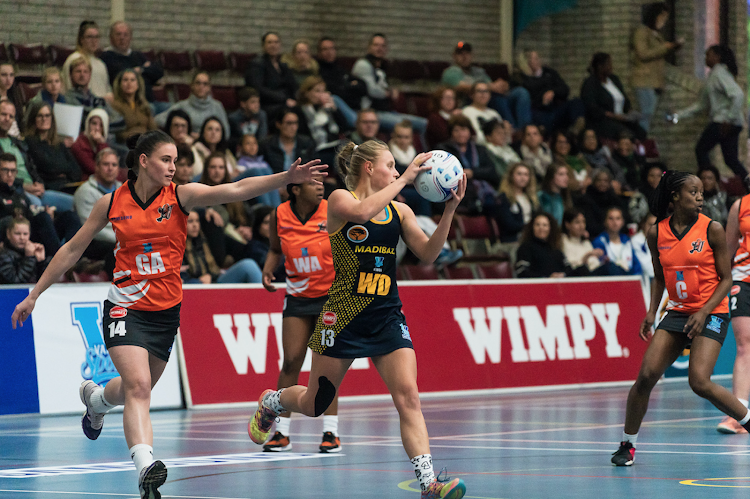 Eloise Webb of Madibaz during the Varsity Netball match between Madibaz and UJ at Coetzenburg Sports Centre in Stellenbosch on Sunday.
Image: Kevin Sawyer

Madibaz recorded a 44-28 victory over UJ in their Varsity Netball match at the Coetzenburg Indoor Centre in Stellenbosch on Sunday, keeping their exceptional start to the season on track.

The women from Port Elizabeth were first to score and after the first quarter they had a handy five-goal lead at 10-5.

UJ kept within touching distance until they called the power play, but unfortunately for them it was Madibaz who capitalised on the opportunity, scoring twice and creating a bit of a gap in the score.

The half-time hooter saw Madibaz lead 20-11 and UJ coach Roeline Mars must have had some stern words for her charges, as they were first to score after the break.

This, however, spurred Madibaz on and they quickly went into a massive 15-goal lead, again using the power play well.

UJ managed to grab three goals in succession and the quarter ended 32-21 to Madibaz.

UJ again scored first, but Madibaz put their foot down and raced out to another 15-goal lead, and at 41-25 they scored to make the margin an insurmountable 16 goals for UJ to chase.

Whenever UJ scored at one end, Madibaz did the same at the other end.

When the final whistle went Madibaz had shown that their impressive start was no fluke and that they are strong contenders for a place in the semifinals of 2018 Varsity Netball.

UJ stayed rooted to the bottom of the table and know that they need to regroup quickly.

Whatever the fans’ allegiances are, they will make sure not to miss out on what promises to be a quality set of matches.

Get the news in your inbox
Next Article