The Bulls must do it for SA 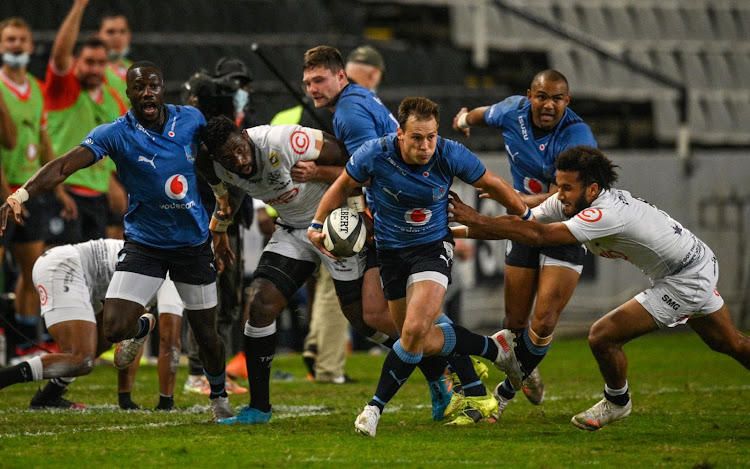 BURSTING THROUGH: Ivan van Zyl of the Bulls breaks away during the PRO14 Rainbow Cup SA match against the Sharks at Kings Park in Durban on Saturday
Image: (Photo by Christiaan Kotze/Gallo Images)

A rampant Bulls side can strike a blow for SA rugby by beating Benetton Treviso and lifting the PRO14 Rainbow Cup in Italy on Saturday.

The final ends SA’s long Covid-19-enforced wait on the sidelines after victory at the 2019 World Cup in Japan.

While much of the rugby world returned to normality, SA was forced to play a seemingly endless series of domestic matches in empty stadiums.

Despite efforts to spice up the local rugby scene, the derby matches became monotonous because of their regularity.

So it will be a breath of fresh air when the Bulls face international opposition again.

Though they are having to travel to Italy to play Benetton at their home ground, the Bulls are still favoured to emerge triumphant.

There will, however, be no complacency in the Bulls ranks as they prepare for battle against an unbeaten Benetton side who are expertly coached by former All Black Kieron Crowley.

The Bulls will be without Trevor Nyakane, Morne Steyn, an injured Duane Vermeulen and Marco van Staden, who are in camp with the Boks and not eligible for the final.

Victory for Jake White’s all-conquering Bulls would also provide the SA rugby with a timely boost ahead of upcoming Bok Tests against Georgia and the British & Irish Lions.

All eyes will be on the 6,700 capacity Stadio di Monigo in Italy when the Bulls look to make history by winning the first Rainbow Cup final.

White says his team will be playing for the entire nation when they take on the European PRO14 champions.

A maximum of 1,000 fans will be admitted under current Italian regulations.

Italian Rugby Federation president Marzio Innocenti has promised the final will be a special occasion for rugby fans around the world.

He said it showed PRO14 rugby bosses were confident in what Italian rugby had achieved on and off the  field.

The final ties together dual tournaments which have been operating in Europe and SA.

For once, provincial loyalties will be put aside when the nation rallies behind the boys in blue on Saturday.