NMU and foundation partner to take Mandela’s legacy into future 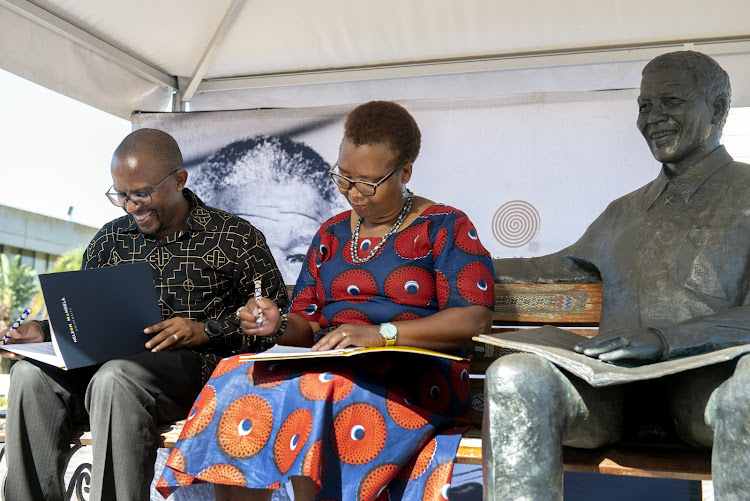 On the eve of the 30th anniversary of former president Nelson Mandela’s release, Nelson Mandela University and the Nelson Mandela Foundation have cemented a strategic partnership that seeks to take Madiba’s legacy forward into the next 30 years and beyond.

The university and the foundation — which  share a common vision of entrenching Mandela’s legacy in their respective contributions towards an equal and just society — have been in collaboration on a number of projects.

On Monday, these institutions formalised this partnership with the signing of a memorandum of understanding (MOU) in the areas of social justice advocacy, scholarship and research and human rights activities, as defined by the parties.

NMU’s work and consciousness mirrors that of Madiba, which is being kept alive through the Nelson Mandela Foundation which was founded after his presidential term ended in 1999, to continue his life’s work and advance his legacy.

Speaking at the signing ceremony, held at the Mandela Bench on the university’s south campus, NMU vice-chancellor, Professor Sibongile Muthwa, described the partnership as a match made in heaven.

“The foundation and the university are both cognisant of the great responsibility associated with carrying the name of Nelson Mandela,” Muthwa said.

She said when the academic institution renamed itself from Nelson Mandela Metropolitan University to Nelson Mandela University in July 2017, it was more than just about dropping the word “metropolitan” but a statement of intent, anchored in its resolve towards social justice — to which Madiba himself had committed his life.

“The relationship between Mandela University and the Nelson Mandela Foundation is not merely symbolic; it is a working relationship.

“We are committed to a vigorous intellectual collaboration that supports research and scholarship,” Muthwa said.

Reminiscing on the last 30 years, since Madiba’s release, foundation chief executive Sello Hatang pondered the success of the work of the former president in the 1990s.

“Given the urgency of the times, both in SA and globally, what our institutions do together must be geared to finding a way forward, bringing people together, developing good leadership at all levels, and identifying strategies, models and tools which work in practice and which empower people to participate meaningfully in transformative work,” Hatang said.

The collaboration between the university and foundation has so far given rise to three projects, all geared at making a meaningful impact on society.

One such project is the Transdisciplinary Institute for Mandela Studies (Tims), a joint project between the university, foundation and the Human Sciences Research Council.

The Tims idea was launched last year during a unique colloquium titled “Dalibhunga: This time? That Mandela?”

Explaining why the foundation had come on board to support Tims, its director of archive and dialogue, Prof Verne Harris, said the university was one of about 60 organisations worldwide authorised to carry Madiba’s name but “it was very seldom that an institute carrying the name comes to us with a proposal to do meaningful work”.

Another project is the Atlantic Fellows for Racial Equity (AFRE), which is also in its second year of operation.

It is a partnership between the Foundation and Columbia University, in New York City, with Mandela University roped into the collaboration to assist with developing curriculum content for the fellowship programme.

The foundation, in collaboration with the non-profit organisation Habitat for Humanity, is also exploring working with the university’s department of human settlements on affordable community housing.