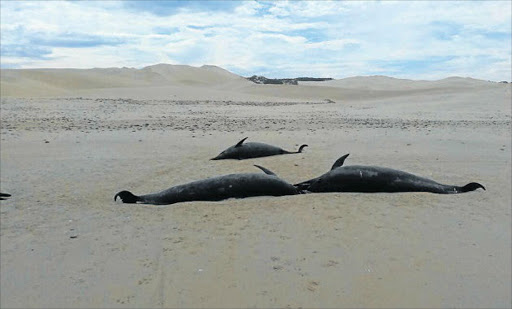 A baffling phenomenon saw the discovery of 38 dolphin carcasses scattered along the Sundays River coastline yesterday – the sixth such incident of common dolphins beaching themselves at the approximate same spot over a period of 20 years.

SANParks spokeswoman Fayroush Ludick said yesterday’s discovery, near Bird Island, of the pod of 38 common dolphins – 22 adults and 16 juveniles – was the largest recorded number of dolphins beaching themselves on the Southern Coast. The causes for the stranding are still unclear.

The 2km stretch of shore dotted with the decomposing dolphins was discovered by East London helicopter pilot Noel Greyling, 28, during one of his weekly trips along the coast from East London to Port Elizabeth.

Wildlife expert and Bayworld marine- biologist Dr Grey Hofmeyr described the event as a rare but regular occurrence along the shoreline between Sundays River and Woody Cape.

Hofmeyr will spend the weekend collecting specimens from the decaying caresses to gather research information in an attempt to shed light on the mysterious event.

“There are no definitive reasons as to why the dolphins do it, but there are several theories, one being that the lead dolphin might have been sick or injured and beached itself, and because of their strong group dynamics the rest of the pod could have followed,” Hofmeyr said.

“The other more likely explanation is because of the shape of Algoa Bay. There is a deceptive gradient of sand when one approaches the shore.

The dolphins being deep-sea marine wildlife, don’t recognise the slope and assume the sea carries on going, and in their confused state they just continue swimming all the way onto the beach.”

Ludick said judging by the discoloration of the dolphins’ flesh, the pod probably beached about three days before they were discovered.

“There have been a couple of incidents like this over the last two decades. But this particular occurrence is the biggest pod we have recorded on the southern coast.

“The reason is not clear, but the dolphins had no visible injuries so foul play has been ruled out. We have rangers out there [yesterday] and Bayworld will be there over the weekend to gather more info as to why it happens,” Ludick said. Greyling said he had been flying along his usual route when he hovered over the disturbing sight.

“It first just looked like black dots – then I did a loop and flew over again, but closer, and saw they were dolphins. It was a really disturbing experience,” he said.