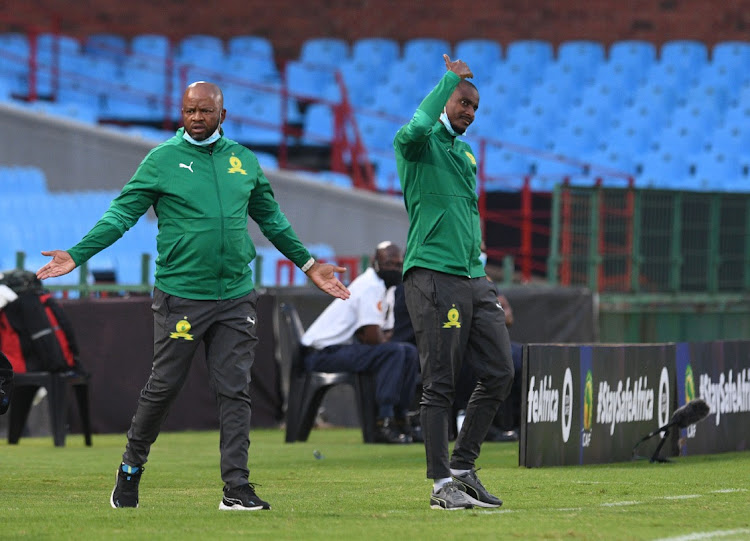 Mamelodi Sundowns’ co-coaches Manqoba Mngqithi and Rulani Mokwena have won the DStv Premiership coach of the month award for the third time in succession.

The coaching duo took the award for December after they led Sundowns to four wins, two draws and a defeat.

Four-time successive champions Downs are running away with the 2021-22 Premiership after they took a 14-point lead into the Christmas and Africa Cup of Nations break, just past the halfway stage.

Kaizer Chiefs midfielder Nkosingiphile Ngcobo won Premiership goal of the month for his left-footed strike curled in against Maritzburg United in the 80th minute of Amakhosi’s 2-0 win at FNB Stadium on December 22.

“Sundowns suffered their first loss of the season away to AmaZulu. Royal AM, SuperSport United, Baroka FC were all beaten and the highlight of the Brazilians’ good run in December came when they thumped title rivals Orlando Pirates [4-1] at home,” the Premier Soccer League (PSL) said on Monday.

“In the seven games they conceded seven goals, hitting the back of the net 12 times, to end the month and year 14 points clear of second-placed Pirates.

“The co-coaches were praised for their good squad rotation and grinding out results in a tough period ahead of the midseason break.

“Marumo Gallants new coach Dan Masilela, who brought positive changes to the club in December, gave Mngqithi and Mokwena a good tussle during the judging session but fell short on the votes. Mandla Ncikazi and Fadlu Davids of Orlando Pirates also received acknowledgment.

“After playing a stellar role for Sundowns in December, Jali was named the DStv Premiership player of the Month. The midfielder beat his teammate Peter Shalulile, Kwame Peprah of Orlando Pirates, Chippa United’s Bienvenu Eva Nga and Royal AM forward Victor Letsoalo to the award.

“Jali was outstanding in December. He was a marvel to watch as he bossed the Sundowns’ midfield. His experience has been invaluable during a loaded period in December'.

“The manner in which he broke down opponents’ attacks and in turn start build-ups to Sundowns attacks, which on some occasions led to goals, has been very impressive.”