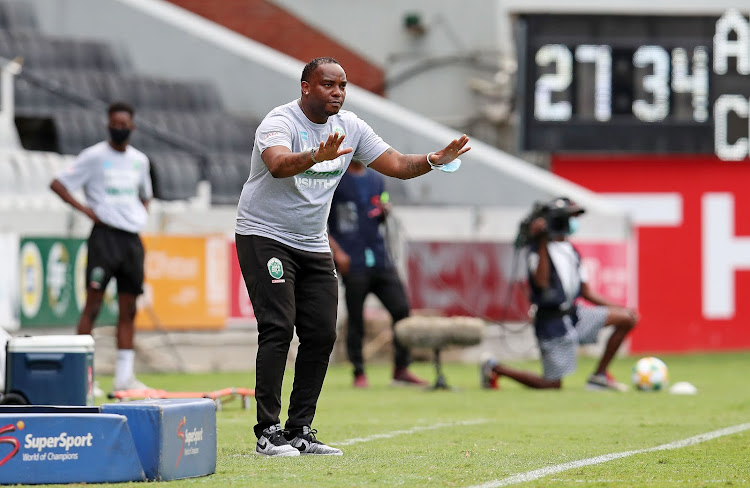 AmaZulu head coach Benni MCarthy was so annoyed with Siphelele Mthembu’s miss that he didn’t bring him back after the break.
Image: Muzi Ntombela/BackpagePix

AmaZulu moved to sixth place on the DStv Premiership standings after a lone strike from Luvuyo Memela was enough to earn a precious victory against 10-man TS Galaxy at the Mbombela Stadium in Mpumalanga on Tuesday.

This 1-0 triumph was only their second league victory this season but AmaZulu were always in control of this match and looked more convincing as they created the clearer chances to go ahead in the first half, with Augustine Mulenga and Siphelele Mthembu failing to take advantage of the openings.

With this defeat, a fifth in seven matches, the fading Galaxy will remain rooted at the bottom of the table with only two points collected from a possible 21.

This game was Galaxy’s first under new German coach Sead Ramovic and, based on the way things are going, he will need to adapt very quickly to the rigours of South African football. Ramovic’s side had little chance of recovering from Memela’s second-half goal after defender Pogiso Sanoka was shown a red card for a second bookable offence with 20 minutes to go.

Galaxy were outpaced and outmuscled on multiple occasions and lacked creativity that could have allowed their captain Mxolisi Malepe and Sinethemba Mngomezulu to test Usuthu gloveman Veli Mothwa.

Lindokuhle Mbatha, the Galaxy playmaker, had a big chance to put his side in the lead midway through the first half when he was teed off by Macuphu inside the area after a better build up from the home side, but his shot was deflected straight into Mothwa’s hands.

The big miss though had to go Mthembu, who couldn’t finish a few centimetres from the goal line after Siyethemba Sithebe crossed for him on the right. Mthembu had just the Galaxy goalkeeper Vasilije Kolak to beat but his shot, though it did go past the goalie, was too tame for Sanoka not to clear it.

Usuthu coach Benni MCarthy was so annoyed with Mthembu’s miss that he didn’t bring him back after the break, with Bongi Ntuli taking his place.

Ntuli didn’t waste time in making his presence felt, linking up well with the overlapping left-back Tercious Malepe to set up Memela for Usuthu’s well-deserved goal in the 56th minute.

McCarthy’s team continued to press for more goals, with their enterprising play and pace proving to be very difficult for the home side to cope with.

The win is a big boost for Usuthu, who travel to the DR Congo on Thursday to meet TP Mazembe in Lubumbashi  in the second leg of the Champions League second preliminary playoff on Saturday.

Usuthu played a 0-0 draw at home against Mazembe and victory against the five-time winners of the Champions League will take the Durban side to the group stages in their first-ever appearance in the competition.