Bafana coach Broos says players will not be complacent against Ethiopia 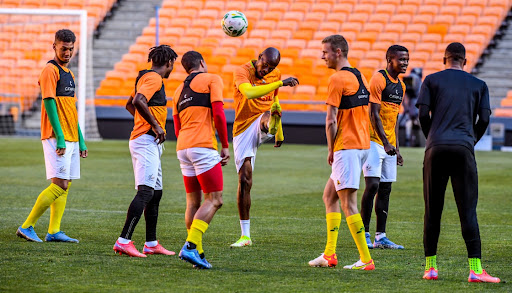 Bafana Bafana players during their training session at FNB Stadium in preparation for the World Cup qualifier against Ethiopia.
Image: Sydney Seshibedi

Bafana Bafana coach Hugo Broos has vowed that there will be no complacency from his charges when they take on Ethiopia during the crucial 2022 Qatar FIFA World Cup qualifier at FNB Stadium on Tuesday (6pm).

Bafana, who will be playing in front of 2,000 fans, go into this match with confidence sky high after they pulled off an important 3-1 win over Ethiopia away from home last weekend.

That win has helped Bafana to stay on top of Group G with seven points ,but they are followed closely by second-placed Ghana, who have six points and are in Zimbabwe on Tuesday afternoon in Harare.

“I am sure that the mentality of complacency will not be in the team,” said a bullish Broos during his pre-match press conference at FNB Stadium.

“I am saying this because I see how the guys behave in camp, how they treat each other as teammates and how they are training. Our trip to Ethiopia was not easy but the players woke up on Saturday and they were happy to train with a smile.

“Because of that spirit, I am sure that on the pitch there will be no mentality of complacency because we won the match against Ethiopia away from home. This is not going to be an easy game and even though we are playing at home, I am confident that the  players will be focused on the job at hand.”

Broos said they didn’t play on a good pitch in Ethiopia but the well-manicured surface at FNB Stadium will be advantageous for Bafana.

“This is a different game, we played on a bad pitch away from home and I don’t understand why they give them a bad pitch while they (Ethiopia) have a team that likes to play combination football.

“We are playing on a good pitch at FNB Stadium and that will be better but we are ready. We have the bad trip to Ethiopia behind us of six to seven hours on the plane and three landings, some during the night, but what I saw on the training was something very good.”

The largely youthful Bafana side has improved significantly since Broos started coaching them but he says they are far away from where he wants them to be.

“We have made big steps but we are not where we want to be. It is impossible that in one month you can achieve what you want to achieve. I am happy with what the players are giving me, sometimes they can do it better than other times but we will do it and that is the most important thing.

“I can see that we are growing compared to the first training a month ago. The behaviours of the players give me confidence for the future.”