Losing to Wallabies was not expected, says Mostert

Australia hungrier for first win, but Boks determined to come back stronger 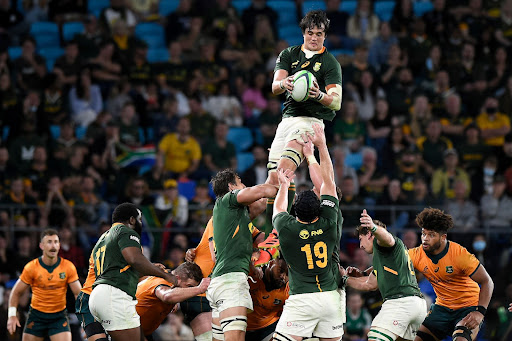 GETTING HEIGHT: Franco Mostert of the Springboks takes a lineout ball during the Rugby Championship match against Australia at the Cbus Super Stadium in Gold Coast, Australia, on Sunday
Image: MATT ROBERTS/GETTY IMAGES

Losing to a hungry Wallabies side came as a surprise to the Springboks, who are determined to bounce back in Saturday’s rematch, flanker Franco Mostert said.

After winning their opening two games in the Rugby Championship against Argentina, the Boks had been strong favourites to beat Australia until they were sunk by a late Quade Cooper penalty.

The Boks now face a must-win game against the Wallabies at Brisbane’s Suncorp Stadium (kickoff 9.05am SA time).

After Saturday’s showdown, SA take on the All Blacks in back-to-back matches on September 25 in Townsville and October 2 in Gold Coast.

“A lot of guys were not expecting what happened at the weekend against Australia,” Mostert said.

“Unfortunately, the ball did not bounce our way in the game.

“Credit to the Australians, who I think were a bit hungrier than us.

“We will work hard this week and hopefully come back stronger in the next game.

“The boys are  very confident and positive, and that it a good sign early on in the week.

“Rugby is a funny game.

“You can be at your best and still lose.

“It is just the bounce of the ball.

“It is when teams are capitalising and you find yourself behind and it builds up.

“We know where we are and we have been in this situation before.

“The team know where to go from here and that is a positive.

“I think we can improve on our discipline, which let us down a little bit.

“Now we are focusing on the weekend coming and we will look at the set pieces and other situations.”

Asked if the Boks needed to be more physical in their second game against the Aussies, Mostert said: “I don’t think we will change our game plan and make big changes.

“The things worked that we wanted to do.

“We can be sharper on our exits cleaning and ball carrying.

“If we sharpen up on a few things I feel things will go well for us.”

Mostert said he enjoyed his role of playing flank in the No 7 jersey in the place of the injured Pieter-Steph du Toit.

“It has been an unbelievable journey so far,” he said.

“I think anyone will play in any number just to be in the Bok match day 23.

“Just to be on the group is amazing; to take over from a guy like Pieter-Steph du Toit,  who is a brilliant player, was a big honour for me to try to fill his shoes.

“I will give of my best and hopefully I will make him proud by the manner in which I play and wear the No 7 jersey.

“That goes for all the Bok players who have worn the No 7 jersey in the past.

“I want to make them all proud and my teammates and family as well.”

“The switch was not difficult.

“Our coaches Jacques Nienaber and Deon Davids had backed me and picked me in that position.

“That shows me that are positive towards me and that makes things easier.”

In the late game at Suncorp Stadium the All Blacks take on Argentina (kickoff 12:05pm SA time).