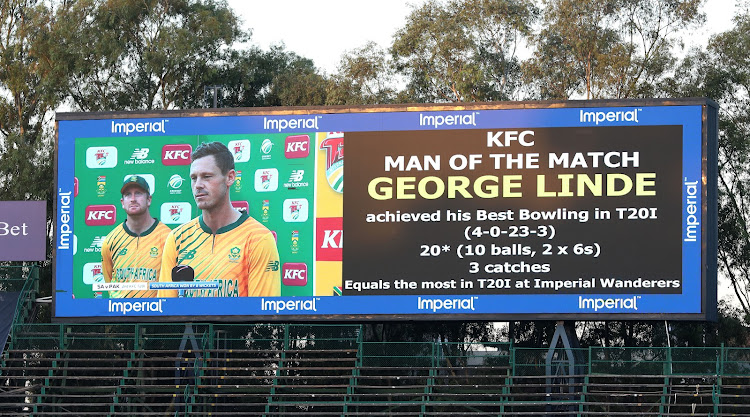 George Linde played out of his skin to deservedly earn his man of the match award.
Image: Muzi Ntombela/BackpagePix

SA levelled their four-match Twenty20 series with Pakistan after an improved performance from the bowlers helped them to a six-wicket win at the Wanderers in Johannesburg on Monday.

It was a marked improvement for the bowlers‚ who were not accurate with their lines and lengths in the opening match at the same venue on Saturday‚ as the visitors took the lead after chasing down their highest total in T20s.

There were no such worries this time around as the Proteas clawed their way back to tie the series at 1-1 with two more matches to come at SuperSport Park in Centurion on Wednesday and Friday to conclude the seven-match series.

Left-arm spinner George Linde [3/23] and left-arm paceman Lizaad Williams [3/35] found their range on a good batting pitch and led the bowling charge with three wickets apiece in their four overs each to help the Proteas skittle out Pakistan for an average 140/9.

Linde‚ who also starred with the bat with 20 runs off 10‚ struck with the first ball of the afternoon after dangerous Pakistan opener Mohammad Rizwan charged down and mistimed his shot and was caught at mid-off by Aiden Markram.

Linde struck again in his second over to dismiss another dangerous opener Sharjeel Khan as Pakistan slumped to 10/2 after 2.5 overs.

Babar Azam’s team never got going after he won the toss and surprisingly chose to bat first.

Mohammad Hafeez‚ in his 101st T20 international match‚ combined with captain Azam and consolidated their innings with a good partnership until the end of the 10th over‚ when Linde grabbed his third wicket‚ Hafeez edging to Heinrich Klaasen for 32 valuable runs off 23 balls.

Williams cleaned out the Pakistan middle order of Faheem Ashraf [5 off 10]‚ Hasan Ali [12 off 3] and Mohammad Nawaz [2 off 3 balls]‚ who all chipped in with small partnerships with their captain Azam.

But as soon as Azam was dismissed at the end of the 17th over by Sisanda Magala [1/32]‚ to leave his team tottering on 128/7‚ the writing was on the wall as Pakistan were eventually bundled out for a meagre 140/9.

Magala had a shocker of a first over‚ starting with four illegal deliveries in a row — three no-balls and a wide — in a 12-ball over he would want to quickly forget at this level.

But the bulky deadly death fast bowler from Gqeberha pulled himself together swiftly.

Magala’s removal of Azam‚ who top-scored with 50 runs off 50 balls‚ hamstrung Pakistan’s scoring rate as the visitors could only manage 13 runs in the last two overs to set the Proteas an average target of 141 from 120 balls.

The Proteas started the chase well with a good opening partnership of 44 between openers Janneman Malan [15 runs off 10 balls] and Markram [54 runs off 30 balls] before the former was caught behind off the bowling of Shaheen Shah Afridi after 4.3 overs.

Wihan Lubbe came in and lasted seven balls for his 12 to bring to the crease captain Klaasen at the end of the first six overs of the power play to leave SA on 58/2.

When Markram departed after 8.6 overs‚ to bring Klaasen to the middle‚ and Pite van Biljon [2 off 6] falling soon after‚ there would have been a few racing hearts from the team’s dugout.

But stand-in skipper Klaasen‚ who was joined by Linde‚ made light work of the chase as they guided the Proteas to a series-levelling victory.

The third T20 will be played in Centurion on Wednesday [2.30pm start].