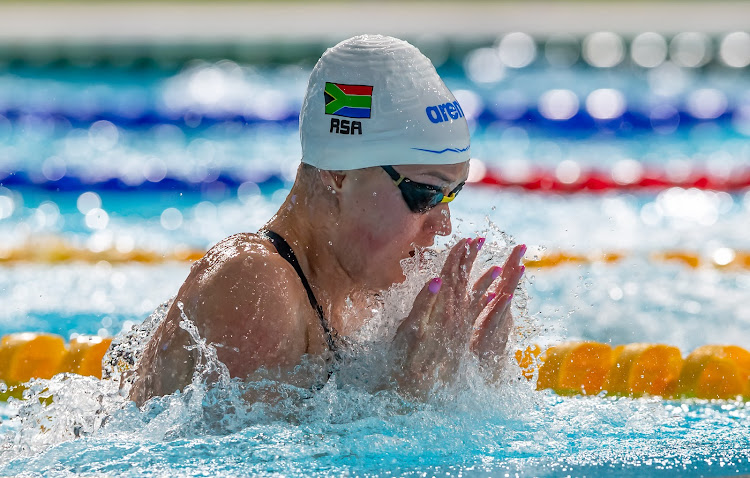 RECORD START: South Africa’s Lara van Niekerk dipped under the 30-second mark to win her heat in the women's 50m breaststroke at the Commonwealth Games in Birmingham on Friday
Image: GALLO IMAGES/ANTON GEYSER

Gqeberha-raised Jamie Riddle battled the world’s best on the opening day of the Commonwealth Games in Birmingham on Friday, but he faded on the final run leg of the triathlon to end sixth.

“I was quite stressed before the race,” Van Niekerk said.

“I had like a heat flush and walking out the crowd went crazy, the adrenaline started pumping and then I just felt so good, like I was gliding through the water.”

Van Niekerk is the favourite for the gold medal in this event, which will be decided in Saturday’s final.

In the men’s triathlon, Riddle lined up as SA’s best hope after defending champion Henri Schoeman withdrew to focus on Sunday’s mixed relay, where Riddle will be able to take another shot at silverware.

It was felt that if the 22-year-old was going to have any chance of reaching the podium, he would have to get in a breakaway in this sprint event (750m swim, 20km bike ride, 5km run), and that’s exactly what he did.

Riddle came out of the water second, having swum on the heels of New Zealand’s Tayler Reid, and with Hayden Wilde, another Kiwi, broke away early on the bike.

The trio took turns to grow their lead and at one stage they were more than 20 seconds in front of a chasing pack that included Englishman Alex Yee and Australians Matthew Hauser and Jacob Birtwhistle.

They stormed into the run, with Riddle going with Wilde while Reid fell back. And then Riddle started tiring as Yee made an astonishing charge to catch Wilde, whose gold medal dream evaporated with a harsh 10-second penalty for a supposed breach in the last transition.

Wilde was second, but Riddle was unable to hold his position and crossed the line in 51 minutes 32 seconds.

The Blitzboks, champions in 2014, made mincemeat of Malaysia in the sevens rugby, running in eight tries to win 46-0.

Their female counterparts, however, conceded six tries in a 38-0 loss to Australia.

The SA women’s hockey team went down 4-2 to Scotland.

In the lawn bowls, multiple medallist Colleen Piketh, part of SA’s golden women’s pair at Glasgow 2014, opened her account with a 21-14 triumph over Nooroa Mataio of the Cook Islands in the women’s singles.