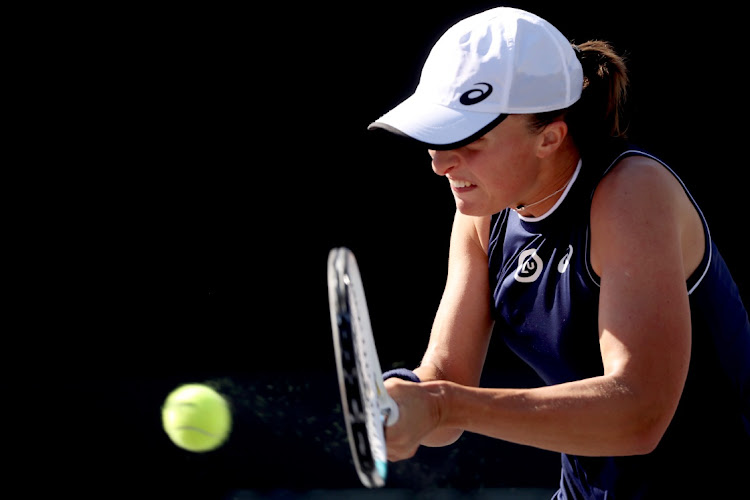 Iga Swiatek of Poland in her singles match against Paula Badosa of Spain during Day 6 of the Akron WTA Finals Guadalajara at Centro Panamericano de Tenis on November 15, 2021 in Guadalajara
Image: Matthew Stockman/Getty Images

Poland's Iga Swiatek was all smiles after defeating Paula Badosa 7-5 6-4 in her final match of the round-robin stage of the season-ending WTA Finals in Guadalajara, despite already being eliminated from the tournament.

Swiatek dug herself out of a 0-30 hole in the final game and rifled a forehand return winner on match point to beat the Spaniard, who had already booked a spot in the semifinals.

The 2020 French Open champion lost to Greece's Maria Sakkari and Belarusian Aryna Sabalenka in her first two matches to fall out of contention for the knockout rounds.

The match was not completely without consequence, however, as the Pole earned 250 points for the win.

“I think it was a really solid match from me,” the 20-year-old Swiatek told reporters.

“I'm pretty happy that I had a chance to show my tennis finally, overcome all these factors about, just play the game. I really enjoyed myself today on court, which is really important for me.”

She said she will be rooting for Badosa in the semis and hoped the loss, which snapped an eight-match winning streak, would not shake her confidence.

In the semis, birthday girl Badosa, who turned 24 on Monday, will face compatriot Garbine Muguruza for the first time.

The second last-four spot from the group will be decided by the clash between Sabalenka and Sakkari, who play later on Monday, with the winners facing Estonia's Anett Kontaveit.

Indian Wells champion Badosa enjoyed straight set wins over both players in her first two matches at the WTA Finals, which were not held last year due to the Covid-19 pandemic. — Reuters