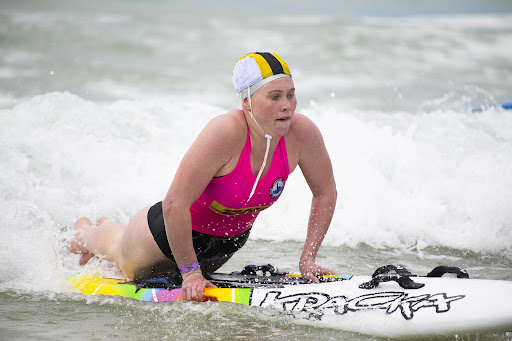 TIME TO SHINE: Clifton’s Holly Cleworth came good in the U17 division of the DHL Lifesaving SA National Championships at Kings Beach in Gqeberha on Tuesday
Image: ANTHONY GROTE

While the juniors battled it out in the surf, the nippers took to the pool at the DHL Lifesaving SA National Championships in Gqeberha to break various SA records and home favourites Summerstrand reigned supreme.

Summerstrand’s young ones put on a masterclass in the pool to break four of the five national records, with the roll of honour reading:

Christiaan van Eeden, from Harties, broke the SA record in the Super Nippers U13.

In the surf competition, Summerstrand’s Courtney Davidson was the female U19 victor of the day, three golds and two silvers the seven events she took part in.

Kings Beach’s Chelsea Cooke, sister of Keegan Cooke, was a close second with one gold, two silvers and two bronzes.

Clifton’s junior stars Naor Lombard and Holly Cleworth came good in the U17 division to help the Cape Town-based club clean up.

Clifton’s seniors bossed the open division in the overall surf events and their juniors were as good in flying a Cape Town flag usually reserved for Fish Hoek at the Nationals.

But in 2021, there was no stopping Clifton, whose team work aligned beautifully with individual brilliance in both the open and junior competitions.

Lombard was always expected to excel and he did not disappoint in scoring 44 from a possible 48 points in six events.

Cleworth’s tenacity, conditioning and versatility meant she entered one more event than her closest rival, Umhlanga Rocks’s Tatum Botha, and because of it she finished with 39 points, compared to Botha’s 38.

Botha, however, claimed the prestigious Iron title, with Cleworth in second place.

Cleworth finished with two gold medals and Botha went one better with three.

Heading into the championship, Lombard was favoured to be a fierce competitor among the U17s and he overwhelmed the opposition, with Summerstrand’s Christian Davidson finishing with two golds and a silver for 28 points.

While Lombard and Cleworth’s impressive performances in the U17 division helped put Clifton Juniors clear of their competitors, the other age groups varied in individual club results.

Durban Surf’s Matthew Allen was the comfortable winner of the male U15 division, with three golds and one silver, while Matthew Brading of Fish Hoek achieved a gold and two silvers for second place.

The U15 females individual accolade also went to Durban Surf, with Dayna Deeble winning a gold and two bronzes, but she showed every quality across all eight events, which ensured her versatility was rewarded with the most points.

Babette van Rooyen of Fish Hoek finished in second place with three silvers and a bronze, but having entered fewer events than Deeble.

In the U19 male division, Umhlanga’s Samuel Norton was sensational in winning gold in all four of his events to take overall first place, while Llandadno’s Thomas Hofmeyer took second place with a gold and a silver.

Courtney Davidson of Summerstrand was the female victor of the day, helping herself to three golds and two silvers from the seven events she took part in.

Kings Beach’s Chelsea Cooke, was a close second with one gold, two silvers and two bronzes.