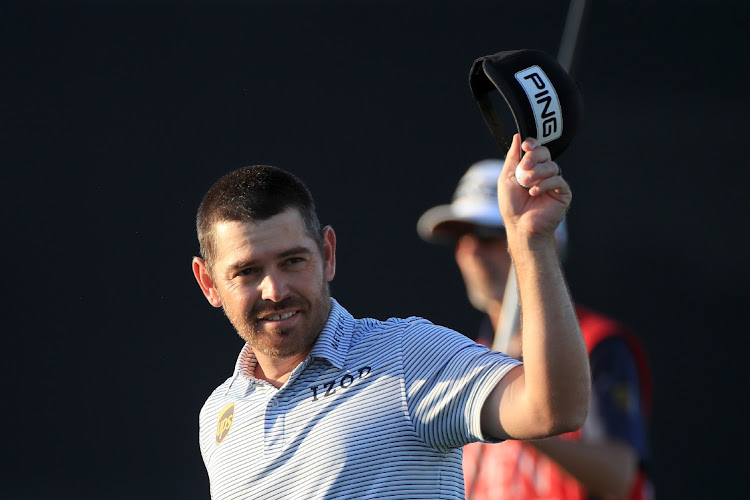 Louis Oosthuizen of South Africa acknowledges the crowd on the 18th green after the third round of The 149th Open at Royal St George’s Golf Club on July 17, 2021 in Sandwich
Image: Oisin Keniry/Getty Images

For most of the past three days South Africa's Louis Oosthuizen made links golf look as easy as shelling peas as he plotted a smooth route through the sand traps and treacherous rough at Royal St George's in Sandwich.

On Saturday, however, the first chinks appeared in his armour as the metronomic iron play that had seen him lead the British Open from round one suddenly went a little "all over the place".

It was hardly a meltdown as the South African still managed a one-under 69 to follow the rounds of 64 and 65 that had set a new 36-hole low-scoring record for the British Open.

And Oosthuizen is still in great shape with a one-shot lead over Collin Morikawa ahead of the final round as he attempts to finally win another major after his 2010 triumph at the British Open.

His bogey at the 11th was only his second of the tournament but another followed at the 13th and with errors creeping in, he narrowly avoided another at the 15th before re-setting to birdie the par-three 16th and finish calmly to lead on 12-under-par.

The 38-year-old will be taking nothing for granted on Sunday though with sunny conditions and light winds likely to see some storming rounds from a high-quality chasing pack.

"I was 13 (under) at one stage and probably a good back nine I could have gone to 14 or 15," Oosthuizen told reporters.

"I made a few bad swings there in the middle of the round, a horrible swing on the 14th, and that put me in some awkward positions and ended up making two bogeys."

Since his romping 2010 win at St Andrews, Oosthuizen has come second or tied second at six majors and it is not a position he wants to find himself in again.

"Finishing second isn't great, so I will play my heart out tomorrow and see if I can lift the Claret Jug again," he said.

Oosthuizen has remained unflappable all week and even when things were going awry on Saturday he barely flinched.

It is a calmness that he will need on Sunday.

"I think all of us are just human to think of lifting the trophy, and that's going to be in your mind," he said. "But I think you just need to know it and how to handle it.

"I don't really change my routine whether I've got a two-shot lead or I'm trailing by eight."

Should Oosthuizen claim the title he would become the second South African to win at Sandwich after Bobby Locke won in 1949.