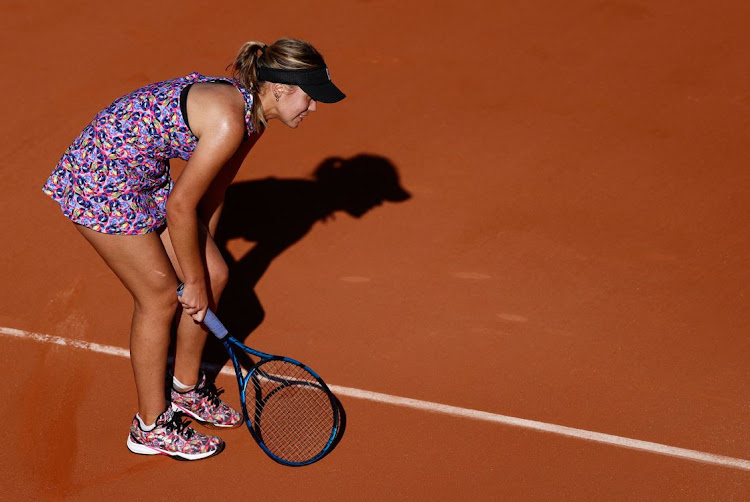 Sofia Kenin of the US during her first round match against Latvia's Jelena Ostapenko at the French Open
Image: CHRISTIAN HARTMANN / REUTERS

The waves of anxiety Naomi Osaka described before heading into a post-match press conference might be familiar to French Open finalist Sofia Kenin, whose gut-wrenching exit from the Australian Open was laid bare in front of cameras in February.

American Kenin, a year younger than Osaka, had seemingly the world at her feet when she arrived in Melbourne to defend her title only months after reaching her second Grand Slam final at Roland Garros.

Behind the scenes, however, the 2020 WTA Player of the Year was on shaky ground.

Weeks after splitting with her management, Kenin was holed up in a hotel room for two weeks as players fulfilled Australia's strict Covid-19 quarantine protocols in the leadup to the Grand Slam.

Once back on the court, the cracks appeared when she cried at the Yarra Classic tournament after a 6-2 6-2 loss to Garbine Muguruza, a rematch of their Australian Open final the year before.

She kicked off her Australian Open defence with a laboured first round win over local wildcard Maddison Inglis, crying before, during and after the match.

She finally crumbled in the next match against Kaia Kanepi because the "nerves big-time got to (her)."

If anyone deserved a leave pass from the compulsory post-match press conference, the anguished Kenin would surely have had a case.

Yet about an hour after the loss, she filed stoically into Melbourne Park's window-less media conference room to take questions from reporters on site and others logged in by video conference from around the world.

"I feel like everyone was always asking me: 'Would you want to? Do you see yourself getting (to Melbourne) and winning again?'" she said.

"Obviously I said yes. With the way I’m playing, no."

She then broke down in tears.

Osaka's press boycott, followed by her withdrawal from the French Open on Monday, has put the media under the microscope and triggered criticism of the Grand Slams that threaten fines of up to $20,000 if players skip compulsory press conferences.

Players can opt out without fear of sanction if injured or "physically unable to appear" but there is no provision for mental strain, a grey area made murkier with the emotional toll of a disappointing loss.

Players rallied around Osaka with supportive messages after she revealed her mental health battles on Monday yet none went so far as to publicly back her press boycott or berate the Grand Slams for being sticklers for the rules.

"It's definitely not easy. I mean, this is what you signed up for. This is sport. There's expectations from the outside, sponsors, and everyone," Kenin said on Monday.

"You just have to somehow manage it. You have to have a good team around you who support you. You know they're with you. Anything you say is to them, and that's it. They'll always support you and have your back."

Some players, perhaps surprisingly given the agony of facing reporters after a poor performance, have defended the process as "part of the job" and credited the media for raising the profile of the game.

While more for the benefit of the tennis-watching public than the main actors on court, some players admit to enjoying the verbal rallies with the media.

Roger Federer has said his coaches watch his press conferences to gain insight into his mindset.

Others, like Australian firebrand Nick Kyrgios, can not stand them and dismiss questions with contempt.

Venus Williams, a veteran of more than two decades of post-match media, is galvanised by her record of 49 titles, including seven Grand Slam singles crowns.

"For me personally how I deal with it was that I know every single person asking me a question can't play as well as I can and never will," the 40-year-old said after her first-round exit from Roland Garros.

"So no matter what you say or what you write, you'll never light a candle to me."