Tearful Hamilton says he is just getting started 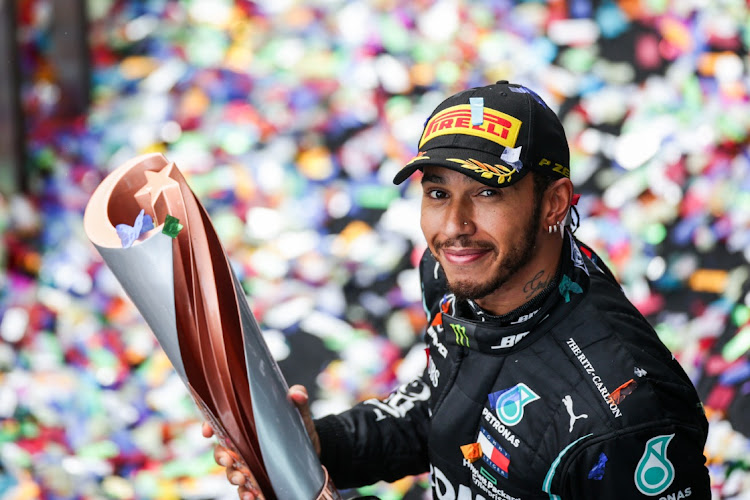 An emotional Lewis Hamilton said he was "just getting started" as he celebrated a record-equalling seventh Formula One world championship in Turkey on Sunday.

The 35-year-old Mercedes driver, now the most successful driver in the history of the sport, has yet to sign a deal for 2021 and beyond but both he and the team have said they want to continue.

Only Ferrari great Michael Schumacher had previously managed seven titles but Hamilton has now matched that and roared past the German in terms of race wins, poles and podiums.

"I know often I say it's beyond my wildest dreams but I think my whole life secretly I probably have dreamed as high as this," he said.

"It felt so far-fetched. I remember watching Michael winning those championships ... seven is just unimaginable."

The Briton choked back tears as he spoke on the radio after crossing the line and he admitted to being overcome by emotion as he thought of his family and all those who had helped him.

"When it came across the line I think it really hit me," he said. "I just burst into tears for that whole in-lap and then I really couldn't get out of the car because I just couldn't believe it.

"I didn't want the visor to come up and people see tears flowing and all that stuff because I had kind of always said I would never let you see me cry."

Asked where the limit might be - eight, nine or even 10 titles - Hamilton indicated he had a way to go.

"There is just no end to what we can do together, me and this team," he said.

"I feel like I’m only just getting started, it’s really weird. I feel physically in great shape and mentally.

"This year has been the hardest year probably for millions of people and I know things always look great here and on the big stage but it’s no different for us athletes.

"I am really hopeful for a better year next year and I would love to stay.

"I still have three races ahead of me that I want to win, but we will get it done. I'm sure," he said.

Hamilton said he felt there was still a lot of work to do in Formula One, helping the sport address human rights issues and become more sustainable.

The German was quick to congratulate his British rival.

"I told him that it's very special for us because we can witness history being made today," third-placed Vettel told reporters when asked what he had told Hamilton after stepping out of the car.

"He is the greatest of our era for sure. I think it's always difficult to compare (eras) - how can you possibly compare (Juan Manuel) Fangio and Stirling Moss to our generation? You can't.

"It doesn't matter. I think every era has its driver or drivers and Lewis is the greatest of our era," continued the Ferrari driver, who won his titles with Red Bull from 2010-13 and had hoped to add to them at Ferrari.

"To me emotionally Michael will always be the greatest driver but there is no doubt that Lewis is the greatest in terms of what he has achieved.

"He has equalled the championships, he has more races won, he has a lot more pole positions."