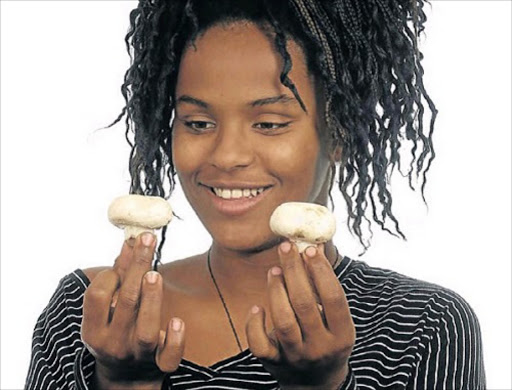 BY SWOPPING meat for mushrooms, 13 men who took part in a recent study to look at the role mushrooms can play in losing weight, lost 25.8kg in six weeks.

Explaining the rationale behind the new “mushroom diet”, dietitian Mbali Mapholi, who conducted the study, said the aim was to find low-energy, high-nutrient foods to incorporate into a daily diet.

For the study, 20 overweight men between the ages of 30 and 40 were recruited.

Only 13 completed the study because seven, according to the study’s final report, “detested” having to swop their daily meat for mushrooms.

The participant who lost the most weight, shed 6kg in six weeks.

South Africa has the highest overweight and obesity rate in sub-Saharan Africa.

Mbali said it was decided to use mushrooms as an alternative to meat because they were low in kilojoules, high in nutrients and had a meaty flavour.

She said participants were given pseudonyms related to mushroom names or the names of mushroom farms, such as Bisporus, who lost the most weight, Big Brown, Portabellini, Denny, Meadow and Forest Fresh.

Researchers also measured the palatability of the meals.

“Generally, mushroom meals are low in kilojoules, low in saturated fat, high in fibre and higher in protein.

“All the meals on the diet had less than 2 093 kilojoules and very low levels of saturated fat.

“The recipes also had considerably higher amounts of dietary fibre.

“The type of dietary fibre in mushrooms is called beta-glucan and is similar to that found in oats.”

Mbali concluded that the reason why the diet worked was because participants consumed fewer kilojoules.

Participants in the research were also asked to rate the dishes in terms of taste, flavour, cost, difficulty to prepare and overall acceptance.

Mbali said 90% of participants said they liked the recipes.

“Verbal responses from the participants indicated that although they would not become vegetarian, they would definitely incorporate more mushrooms in their meals.

“The Mushroom Swap Diet illustrated a powerful ally for weight loss,” she said.