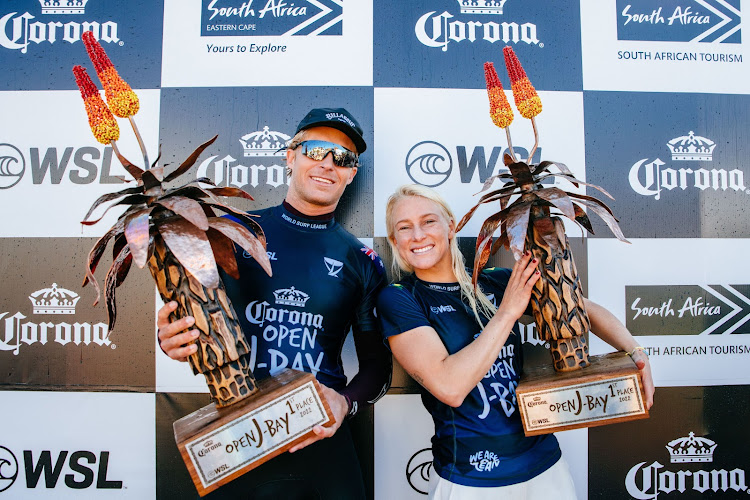 Ewing had a stellar run through the early rounds in J-Bay, facing major opposition in South Africans Matthew McGillivray and Jordy Smith as well as Brazilian Yago Dora (BRA) to reach his first-ever final on the CT.

The stylish regular-foot from Stradbroke Island peaked at the right time on finals day where he posted his biggest scores of the event to beat Jack Robinson.

In his third year on tour, Ewing seems to have finally found his recipe for success and he moves into third on the rankings.

“I’ve been so inspired by Jack [Robinson] this year. He’s had really an incredible year,” Ewing said.

“I hadn’t had a win yet, but coming here I didn’t put any pressure on myself.

“Jack started well and I tried to keep my composure. I still feel like I had a lot left in my tank, but this event is one of the dream events to win, so it feels incredible.

“My first year on tour I got so smoked and last year was kind of a warm-up, but I feel like this year I’m really showing my surfing and feeling comfortable.”

“I’m going to Chopes (in Tahiti) next. I haven’t spent too much time there, but I’m looking forward to the rest of the year.”

In her seventh season among the world’s best surfers, Weston-Webb comes off her strongest showing, ranked second in the world in 2021, and trying to make the rankings Top 5 for a fighting chance at the World Title again.

“I love surfing on my backhand, a lot of people know that, but it’s just been a while since I’ve put it all together and had things go my way,” Weston-Webb said.

“This event, I just really felt in rhythm and flow and the whole time I was just having a blast.  Maybe that’s what set me apart.”

With a win early on in Portugal, a couple of semifinals in G-Land (Java) and Rio and her win on Friday, the Brazilian holds the right cards as the tour heads to Tahiti, where she has spent time developing a relationship with the Teahupoo line-up. — WSL