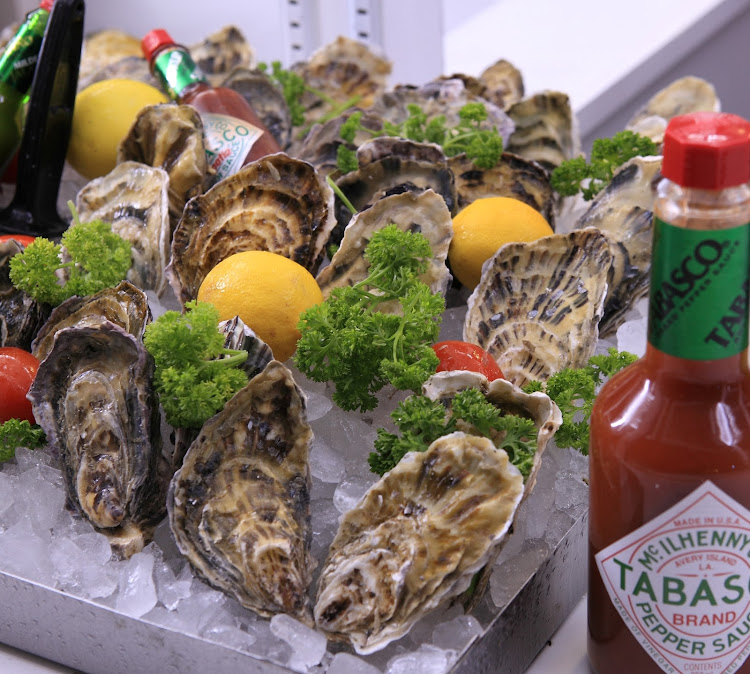 DELICIOUS: The Knysna Oyster Festival is all about these molluscs
Image: Supplied

The Knysna Oyster Festival — now in its 39th year — is an iconic Garden Route event that lures locals out of their snug winter burrows while thousands of visitors descend on the town to enjoy it.

It’s a time when the town literally bustles with activity from eating to drinking to sport and family events — and there is literally something to do every day from July 1 until July 10.

And — of course — there are oysters at every turn you make.

The event started as a winter festival in 1983 to create business and attract visitors during this quiet cold period often described by local restaurant owners as the “suicide-months” when customers vanish and Knysna becomes tangibly quiet.

The name derives itself from a time when oyster farming started in the Knysna Lagoon in the ’80s.

In those days these cultivated oysters had a keen following with locals and visitors alike, but it became apparent that farming these oysters was not viable and conditions in the lagoon were not suitable for oyster beds as they often silted up.

In 2010, permits were not renewed and all cultivated oysters were removed from the lagoon.

So technically the heydays of the cultivated Knysna Oyster are long gone, but that doesn’t mean they aren’t found in the area.

The coastline around Knysna is now where the wild coastal oysters come from and they are apparently famous for their “salty, sweet, buttery and briny” taste I am told.

Cultivated oysters are still plentiful though, but they come in from Gqeberha and the Agulhas area — necessary because literally thousands of these critters are devoured during this festival and there are only so many wild oysters available without damaging their sustainability along the Knysna coastline.

I am not a fan of oysters, but it’s fascinating to see them dressed-up.

Oyster Ceviche is when these dudes are doctored with lime, onion, cilantro, tabasco and made to look pretty.

Panko oysters are when they are coated and fried, but they come in all shapes and form during the festival.

Oysters have been considered a natural aphrodisiac for hundreds of years as they allegedly increase sex-drive and desire.

The 18th Century Italian author Giacomo Casanova reportedly ate large amounts at every breakfast — and we all know that he was a lover-boy of note.

Google oysters and aphrodisiac and even Medical News Today and WebMD have opinions that “while scientists have not proven their effects on libido, oysters contain several compounds, like zinc, that may improve sexual performance or desire”.

Fact or fiction? Ask WebMD and the conclusion is “when it comes to an aphrodisiac, we should never underestimate the power of sensual suggestion”.

And yes, they say, “oysters can put you in the mood for love, but not in the way you think. If you think they will enhance your libido, they probably do, simply in the mind.”

WebMD also suggests, that over and above autosuggestion, that looking at certain things can trigger the sexual imagination ... so what an oyster looks like is in the eye of the beholder.

Favourite events are back this year.

Tastes of Knysna by Flavourlab (July 6) is when chefs from the many restaurants around here compete for top place in preparing the best oyster dish.

The Oyster Shucking (July 7 and 8) is when teams compete to see who can shuck and eat the most oysters.

Over the years, a firm favourite is the Knysna Wine Festival which has been going for 15 years.

On July 8 and 9 it will be back with 40 wineries showcasing unlimited tastings of more than 200 varietals.

Artisan craft cheeses and olive oils go with this. For R180 per person you can taste as much wine as you like.

There are new events like the tea and spice talks daily or learn how to make chocolate.

There is wine and olive tasting in Sedgefield, local Red Bridge Beer tastings and Knysna Gin tastings, there are shebeen visits to local bars and taverns ... there is more than enough to do!

How long a ball of string is, is actually how many events and things are happening during these 10 days.

Best way of choosing what tickles your fancy is to google the Knysna Oyster Festival which has a very comprehensive and helpful website. https://knysnaoysterfestival.co.za/