EP to play for bronze after narrow loss to Blues 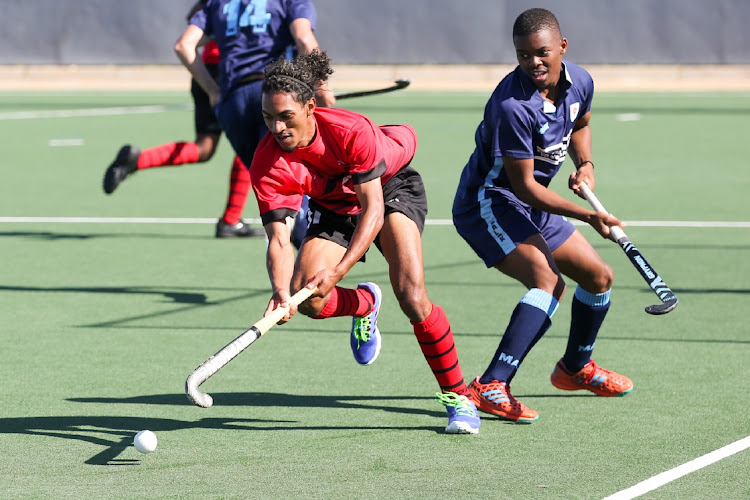 SPIRITED FIGHTBACK: EP’s Caleb Stokes and Ayakha Mthalane of Northern Gauteng in action in the semifinal of the SA Under-21 interprovincial hockey tournament at the KC March AstroTurf in Gelvandale, Gqeberha, on Friday
Image: WERNER HILLS

Eastern Province men’s head coach Michael Abrahams expressed pride in his side’s performance after they lost 4-3 to the Northern Gauteng Blues in their Under-21 interprovincial tournament (IPT) semifinal in Gqeberha on Friday.

Chasing a final berth in their home tournament, the EP men went toe to toe with the powerful Blues — and for large parts of the match gave as good as they received on a windy day at the KC March AstroTurf in Gelvandale.

Cameron le Forestier, the tournament’s top scorer, opened the scoring when he slotted the ball home from a penalty corner to give the visitors the lead.

However, the home side hit back almost immediately to level the match through Joshua Voigt, also converting from a penalty corner.

The teams were level-pegging in the second quarter but the contest came alive in the third when Calvin Davis regained the lead for the visitors, netting from a penalty corner in the 32nd minute and claiming his second with a penalty stroke nine minutes later.

EP’s misery was compounded when Nicholas Keevy was first shown a yellow card for dissent, a ruling that was upgraded to a red card, resulting in the home side going a man down with 10 minutes left.

Voigt, however, went on the attack and added two more goals as the match drew to a close.

Despite throwing everything at the Blues, it was not to be for EP and they ran out of time in the end.

Abrahams told Weekend Post he believed his players had given a good account of themselves, despite the result not going their way.

“In a game like this, sometimes it comes down to who rocks up on the day.

“I think my boys gave a good account of themselves.

“One or two decisions did not go our way, but that is also part of the game.

“You just have to manage in phases and make sure you are on par when the time comes.

“Well done to Northerns, I think they were really good today and they took their chances when it mattered,” Abrahams said.

He said his players had shown a lot of heart and had a great opportunity to build on this performance.

“This match was also a learning curve for us — it is not often that an EP side plays in a semifinal [of an IPT], so while we may not have got the result we were after, we can be very proud of the way we handled ourselves out there.

“Getting a couple of cards, we were down and it was difficult to build momentum from there, but I think we managed well.

“I feel the comeback was on, we just ran out of time in the end,” Abrahams said of the red-card decision which ultimately changed the game.