Nooitgedacht expansion on track for April 1 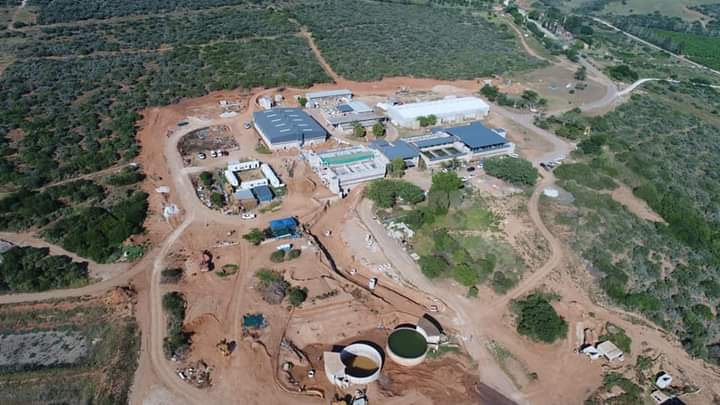 The completion of the Nooitgedacht phase three expansion project is on track and will be finished as early as the end of March, water and sanitation minister Senzo Mchunu said on Friday.

The minister said all the necessary funding had been made available to the implementing agent and he was satisfied by what he had seen of the work under way at the water treatment plant, a key element in Nelson Mandela Bay’s strategy to combat the drought.

Speaking at Coega’s Vulindlela Village Conference Centre after visiting Nooitgedacht, he said though there had been problems with the Amatola Water Board’s role as implementing agent, the news from the project was entirely positive.

“There’s plenty of life there and I’m quite happy.

“It’s 99% finished and the contractor is saying, while final handover is scheduled for July, the first drops of treated water will be delivered through Nooitgedacht phase three by April 1.”

The phase three expansion of Nooitgedacht — designed to give the Bay an extra 70Ml a day of water from the  Orange-Fish Transfer Scheme, raising it from the current 140Ml/day to 210Ml/day — is budgeted to cost R534m.

“There’s no issue of money at all. They must tell me if there is.”

The transfer scheme pumps water from the Gariep Dam on the border of the Free State and the Eastern Cape 400km south to the Nooitgedacht Water Treatment Works at Sunland, on the northern edge of the metro, through a system of pipes, canals, tunnels, dams and three rivers.

Mchunu said he had visited the Eastern Cape in part to assess the financial, governance and delivery problems at Amatola Water.

“We’ve listened to them today and we’re taking away lots of notes and we will be having another round of engagement and then making some decisions.”

He said his trip was also aimed at coming to grips with the water challenges in Nelson Mandela Bay.

“It’s clearly a quandary started by this drought of seven years and the circular challenges of supply, demand and quality.”

He said though the metro had got on top of the tap water contamination scare that hit the city in February, it was still struggling to combat colouration problems and his department would be looking to assist in this regard.

“Next week, our technical team will be brainstorming with the Nelson Mandela Bay water team on how to bypass this problem.”

Mchunu spoke to The Herald after a long delay in which an initial invitation to engage with him during a site visit fell through after the programme was adjusted without notice.

He was then locked in a series of meetings with the metro and municipalities which the media was not allowed to attend.

The plant, situated between Sunland and the metro, was established a year and-a-half ago to allow the Bay to harvest an extra 40Ml/day from the Gariep line while Nooitgedacht phase three, due to multiply delays, was still being completed.

However, with the heavy pollution entering the Gariep line through the Fish River due to mismanagement of sewage in the Karoo by the Chris Hani district municipality, and continued delays on Nooitgedacht phase three, Grassridge could not manage — and the metro confirmed on February 7 that municipal tap water was contaminated by E. coli bacteria from faeces.

The plant was taken offline, solving the contamination problem but also cutting the Bay’s already curtailed supply of clean water by 40Ml/day.

Tsatsire said his team had reconfigured the plant and introduced an automatic sampler that would alert the plant manager electronically if any quality problems were detected.

“We are aiming at having Grassridge back on line on March 25, though it could be earlier.”

He said the other quality challenge with the Bay’s water lay with its 79 reservoirs but was once again related to the broader issue of the drought.

All the reservoirs were built to receive water from different supply lines to maintain healthy operation.

But because of the low level of the metro’s western dams — a combined 15.6% on March 10 — this water was no longer available when reticulation from Nooitgedacht failed.

This could be because of a power outage or a pipe bursting.

“The result is a lack of flexibility and we are forced to let the water drain to the bottom of the reservoirs.

“When this happens air enters the pipes and bacteria develops.”

He said some contamination also came from the sediment which collected in the bottom of the reservoirs.

“We have not cleaned our reservoirs for four years because you need to decommission a reservoir before you clean it and because of the drought we have not had the flexibility to do that.”

He said as part of its new system to contain any contamination from this source, the metro now dosed all its reservoirs with chlorine on a weekly basis.