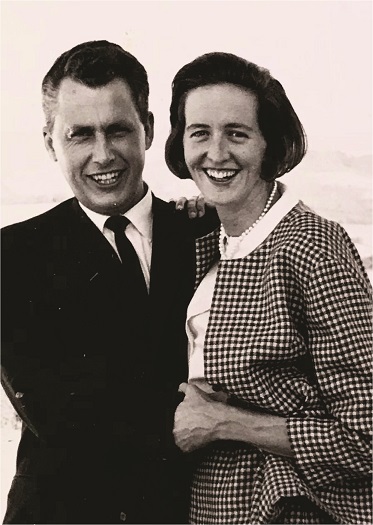 A GREAT VINTAGE: Spatz and Vera Sperling in the early days of their winelands love story
Image: SUPPLIED

He surprised his friends and family, as well as his future bride, by announcing their engagement just two weeks after meeting her.

Later, after they were wed, he named a vineyard in her honour with a tongue-in-cheek acknowledgment of the lifelong “cross” she would have to bear in being married to him and putting up with his self-confessed “madcap schemes” to make money.

Such is the love story of Vera and Spatz Sperling, and their marriage that lasted more than 50 years before the Delheim patriarch’s death in 2017.

Vera still often tells the tale of how, two weeks after their first meeting, Spatz caught both her and guests off-guard at an informal gathering in the Delheim gardens one afternoon when he suddenly announced their impending marriage.

Afterwards, he turned to her and quietly said: “I hope you don’t mind.”

Clearly, she didn’t mind — they were married in 1965 and their partnership has left its mark on the Stellenbosch estate now run by two of their children, as well as on the modern-day South African wine industry and especially its role as a major tourism asset.

Long before “destination wine farms” with children’s play areas, artisanal food pairings and restaurants helmed by top chefs, tasting and buying wine direct from estates involved bumping down dirt roads around Stellenbosch and Paarl to a makeshift counter where one could taste wines with the farmer-winemaker and buy a few cases to transport home in the car boot or have dispatched by rail.

Delheim was at the forefront of changing all that in the 1970s, with Vera credited as “the brains behind making the place presentable” with its underground cellar tasting room and introducing what became their famed cheese platters to be enjoyed alongside a wine tasting.

The first winery to have a restaurant on the premises, that original platter still features on the Delheim menu today, as well as in various incarnations on menus across the winelands.

The Sperlings banded together with Niel Joubert of Spier and Frans Malan of Simonsig to found the Stellenbosch Wine Route, which celebrated its 50th anniversary in 2021 and spawned a wine tourism industry of up to 20 wine routes from the Western to the Northern Cape, the Garden Route and KwaZulu-Natal.

Astonishing to think that when they mooted the idea they were laughed off by the wine authorities, other wine producers and even the Stellenbosch tourism office.

A fun fact for us Eastern Cape wine lovers, is that in 1962 Spatz Sperling was the first wine producer to venture beyond the winelands in the western corner of the then Cape Province to present public tastings of his wines.

His first stops? East London and the then Port Elizabeth, perhaps giving birth to what is now a passionate community of wine lovers.

Amid all this pioneering contribution to the wine industry as we know it today, Spatz bought a nearby property for its better conditions for premium red wine than Delheim’s cool Simonsberg slopes, and named the vineyards Vera Cruz, cheekily acknowledging the “cross” (cruz) his long-suffering wife had to bear.

It’s from those vineyards that the Delheim flagship Grand Reserve is made, as well as the just-released Cabernet Sauvignon 2018 (R220 cellar door/online shop), a classically styled Stellenbosch Cab which makes a fitting tribute to the Delheim love story and a treat for the month of love.

With silky tannins, subtle integrated oak and all those typical Cab notes of cassis, plum, cedar and cigar box, with ripe red fruits and a smoothly lingering finish — there’s a lot to love about this one!