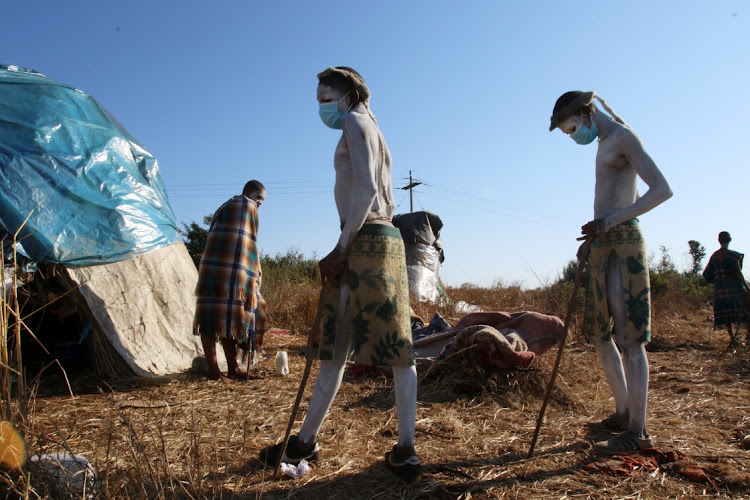 COMING OF AGE: Abakhwetha undergoing the rites associated with traditional circumcision will not be able to take part in the usual homecoming celebrations due to Covid-19 level 4 lockdown restrictions
Image: MICHAEL PINYANA

With thousands of rand already spent on preparing for traditional homecoming ceremonies for initiates, Nelson Mandela Bay families whose sons have undergone the traditional Xhosa passage to manhood have been left counting the costs.

This is because under lockdown level 4, traditional, religious and political gatherings are prohibited as a Covid-19 containment measure.

When traditional initiation was given the thumbs-up in June, hundreds of boys underwent the tradition, especially in the Bay as it was banned in 2020 — first in June along with the rest of the Eastern Cape then in December alone because of high Covid-19 cases.

And now families who had gone all out preparing for the safe return of their sons in the Bay are left frustrated because of the ban on celebrations.

Eastern Cape House of Traditional Leaders interim chair Nkosi Langa Mavuso said: “Imigidi can be organised at a later stage when the current conditions necessitated by the Covid-19 19 pandemic have improved.”

Frustrated Lorraine Bilita, 39, of KwaDwesi said she had gone all-out before SA was moved to level 4, preparing for what was supposed to be a happy day for her family.

“We had bought a cow. I don’t know how are we going to finish the meat, just a few of us,” she said.

“This is just frustrating, I don’t know how it’s going to be, but at least we will do the necessary ritual but as for the proceedings I don’t know.

“It’s my first time sending a child to initiation school.

“I was so proud and wanted to go all the way, but now with these circumstances I don’t know.”

Adding to the  Bilita’s frustrations is the fact that her father and grandfather who live in Johannesburg would now not be able to  travel to the Bay to witness her son graduating from the bush.

Another family in Motherwell said they were in a predicament over the Covid-19 level 4 restrictions.

Busisiwe Hlomi, 44, said her son would come back home a man on Friday and she was happy he was alive.

“It [Covid-19 regulations] disturbed our plans but then I understand that this needed to be done — we can still celebrate him when things go back to normal,” she said.