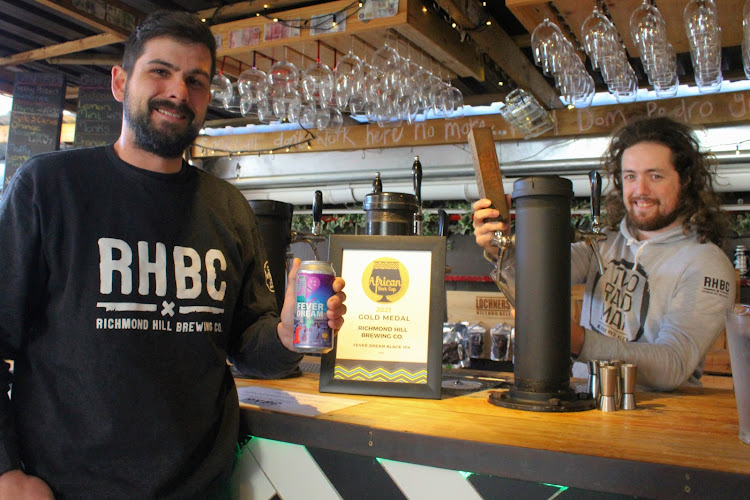 A Bay brewery walked away with bragging rights after bagging a gold medal in one of the most hotly contested categories of the African Beer Cup earlier in June.

And in a few weeks, you too can experience the best black Indian Pale Ale (IPA) on the continent when the Richmond Hill Brewing Company (RHBC) puts the next batch of its special edition, Fever Dream, back on the shelf.

RHBC owner and brewer Niall Cook said the award, one of the most prestigious of the competition, had come as a bit of a surprise.

“I thought our West Coast IPA stood the best chance, and when I heard we won I automatically assumed it was that category.

“However, to my surprise, the award was for Fever Dream.

“Obviously I was chuffed with the win, but what made it so much sweeter was that the black IPA is such a tough category and is considered by many brewers as a very difficult beer to brew properly.

“So taking gold for that beer came with a lot of bragging rights.”

Being a special edition, seasonal brew, Fever Dream is more expensive than their other beers and not always available.

But in celebration of their recent win, Cook and his team are whipping up a batch that should be ready to drink in about three weeks.

“Walking away with two more awards, even if they are second place, proves that we are a well-rounded brewery with not just one speciality.

“It improves the overall reputation of RHBC and every beer we brew.”

The competition required them to send eight cans of each beer to two separate judging panels in Cape Town and Johannesburg.

Each beer is judged on a set of criteria specific to that category and given a score out of 50.

To be eligible for a gold award, a brew must score 40 or higher.

Across all categories, a total of 210 beers were entered from 12 African countries.

“As much as we like winning, there is still great camaraderie in the brewing fraternity and Afro Caribbean rightfully won with an amazing beer,” Cook said.