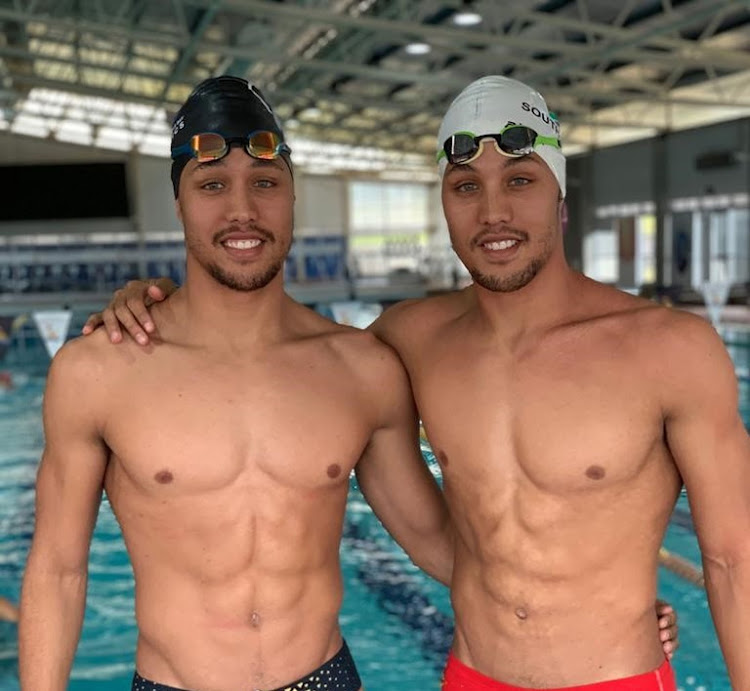 DIFFICULT POSITION: Kariega swim twins Alard and Alaric Basson love swimming but say the financial strain of continuing to compete has made them rethink their future in the sport.
Image: Supplied

One of the toughest decisions an athlete will ever have to make is the choice between sport, and life thereafter.

This is the crossroads at which star Kariega swim twins Alard and Alaric Basson find themselves as they sit on the brink of realising a lifelong dream.

The brothers, who competed at the recent SA Invitational Aquatics Championships, had contrasting competitions and have now begun to question whether it would be wise to continue pursuing their dream, even if it means putting strain on themselves and their backers.

Alaric had a great time in the pool, ending the championships with three gold medals in the three main events on his schedule and coming to within a second of the Olympic standard in the 100m breaststroke event.

The twins, 25, started swimming when they were seven and are in agreement that without adequate backing for athletes, it is difficult to pursue their sporting dreams.

The brothers recently completed their studies in construction management and will graduate from Nelson Mandela University.

However, they have now had to rethink their plans as they feel the pinch brought on by the demands of professional sports.

“This shouldn’t be such a hard decision to make and should not come down to being a financial decision,” Alaric said this week.

“I feel there should be support for athletes who are achieving in the sport. I know, personally, I can improve and get faster, and I will be pushing hard until May.

“I know I haven’t swum the A qualifying time as yet, and if ever there was a time where that support was needed, it would be now to help me reach the highs I know I can achieve,” he said.

By contrast, Alard did not get the results he was hoping for, and has now questioned if he should continue doing what he loves or look towards his future away from the pool.

“I feel I swim better if I race more, so things didn’t go exactly as I expected them to. But that is the nature of the game — you win some, you lose some.

“While my brother is still in it, for me it seems a bit of a long shot, if I am being honest.

“I will compete in the same event as Chad [le Clos], Matt Sates and another qualifier in Ryan Coetzee, so for me to possibly make the Olympic team, I would need to take at least a second-and-a-half off my time in the 100m butterfly.

“So the decision for me is quite a difficult one because I need to decide if I should continue to push until May, or should I start looking for the next opportunity,” Alard said.

Growing up in Kariega, the young men, who matriculated from Muir College, said they were also keen rugby players and at one stage had even thought about quitting the pool to pursue a career in rugby.

“We started off playing rugby when we were younger. It was our passion and we thought we would be rugby stars, more than swimmers.

“We hated every moment of swimming because back then there were no heated facilities for us to swim in.

“Our plan was to give up swimming and focus on our rugby, but our father never gave us that opportunity because he saw potential in us, so he said we could make that decision once we turned 16.

“By the time we turned 16, things started getting better. We had heated facilities, we started travelling and representing the province and SA. So, rugby was out of the question by then and we continued swimming,” Alard said.

Looking back, the brothers are in awe of the support they have received from their loved ones, their community and from people across Nelson Mandela Bay who have got behind them as they have progressed through the years.